The east Suffolk area has some of Britain’s most vibrant and distinctive town centres and Suffolk Coastal and Waveney District Councils are reminding traders and communities of the chance for their centre to be recognised on the national stage.

Now in its third year, the competition celebrates the great work that is being done to revive, adapt and diversify the nation’s high streets and is an opportunity for councils, businesses, community groups and volunteers to learn from the very best.

This year there are more chances to win with 10 categories and prizes, including the chance to win up to £10,000 each, as well as the opportunity for four people to be named ‘high street heroes’.

“We want to champion the wonderful reinvention of our high streets and the district council has confirmed its own commitment by launching the Sustainable Town and Village Economies initiative. So I would encourage as many people as possible to help support this year’s Great British High Street Competition.

Suffolk Coastal is a rich and varied district, making it a great destination for businesses to develop and flourish. From the small village shops and markets, to larger high streets and towns in our communities, the people behind them all play a part in making it a fantastic place to live and I hope we can recognise their hard work.”

The competition is designed to help revitalise high streets by promoting the great work that is being done and sharing good ideas across the country.

The nine competition categories for places are:

The four competition categories for individuals are:

The top three shortlisted in each category will be announced in October. They will then go through to a public online vote and be visited by the Future High Streets Forum judging panel made up of industry leaders from across retail, property and business.

The deadline for entries is Friday, 9 September 2016. 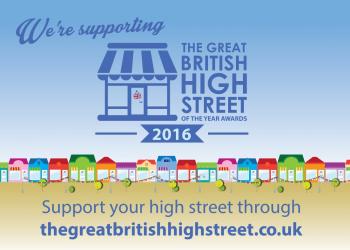