Home > Lowestoft residents are on the go go

Lowestoft residents are on the go go

Older people and young mums are being encouraged to get active, with help from a new sports project launching in Lowestoft.

'Lowestoft O-go-go' officially begins on Wednesday 16 March and aims to get younger mums, over 55s and over 70s more involved in sport and physical activity by showing them that it can be informal, fun and easily integrated into everyday life.

Developed by Sentinel Leisure Trust, Waveney District Council, Suffolk County Council and Lowestoft Rising, the project will promote physical activity to parts of the community who do not typically engage in sport. Supported by Lowestoft sporting star Anthony Ogogo, the project received over £220,000 in funding from Sport England in October 2015.

"Many young women feel unable to take part in sport due to a fear of judgement or a lack of confidence. This is especially apparent in younger mothers who find it difficult to spend time on themselves, rather than their families. In addition, many older people feel unable to be more physically active due to health concerns or uncertainty about the types of sport available.

Lowestoft O-go-go aims to remove these barriers and show that sport can be social, fun and easy to get involved in. The project will bring sporting opportunities to easily-accessible venues within the community so that trying a new sport feels familiar and comfortable. I hope the project helps even more people to realise the health and wellbeing benefits of regular physical activities and shows that sport is open to everyone."

"Being active brings so many benefits such as improved physical and mental health, higher self-esteem, new friendships and a massive sense of achievement when you reach your goals. I'm proud to be associated with this project and I hope it encourages more people to make sport part of their everyday lives."

On 16 March, free taster sessions will be available including Nordic Walking departing from Waterlane Leisure Centre, a rebound fitness with KTroo at Red Oak Primary School as well as seated exercise, new age kurling, cornhole and boccia at Britten Court. Anthony Ogogo is expected to attend the launch, dependent on training commitments.

Other taster sessions will be available from 21 March, including a dance-based fitness class led by East Coast Community Health.

Following the taster sessions, participants will be invited to sign up for a further 8 weeks of activities.

Others activities expected to be included in Lowestoft O-go-go include walking football, 'parent & tot' classes, cycling, buggy fitness, boxercise, swimming and racket sports, with rounders being introduced in June.

To further ensure the success of the scheme and help engage as many people as possible, Sentinel Leisure Trust has appointed Alex Bond, Lowestoft O-go-go Project Officer who will oversee the project.

Find the latest news on Lowestoft O-go-go on Twitter. 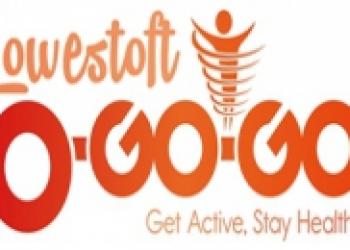