The first new council houses to be built in Bungay since the 1970s have now been occupied, following the recent completion of construction.

Building work on nine new council homes began in December, with construction of a further three properties due to begin shortly. The houses were built by Wellington Construction Ltd, on behalf of the Council.

Also present were Waveney's Housing Manager Dave Howson and Bungay ward councillors Simon Woods and John Groom who as Mayor of Bungay presented Amy with a bouquet of flowers.

"These properties are part of a wider Council initiative to build over 100 new affordable homes across the district. I am delighted to see the completion of these houses, which are the first to be built in Bungay for over thirty years. The Council is committed to providing new council housing and we will continue look for further opportunities to do so."

"We are delighted and proud to have been the main contractor on the Bungay projects and the quality of the finished properties on Manor Road, Princes Road and Garden Close are a credit to all involved. It is also a great plus for the local economy to have a Waveney-based contractor working within the district on these projects where its employees, sub contractors and material suppliers are all based.”

Three two-bedroom bungalows are to be built at Joyce Road, with construction expected to begin shortly. 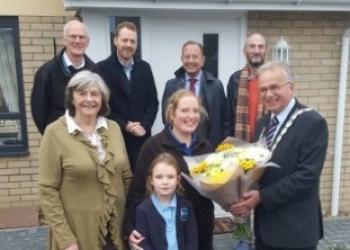