We need more views from Lowestoft

Posted by Waveney District Council on 24 May 2016 | Comments

Waveney District Council is keen to hear from Lowestoft residents as part of a consultation which is considering what will be built and where during the next 20 years.

The Council is preparing a new Local Plan for the District and, since April 22, has been asking the people of Waveney for their views on the levels of growth we need to plan for, and where that growth should be located, between now and 2036.

The consultation, which runs until June 17, asks a number of questions about other key planning issues such as the approach to affordable housing or design of new developments. However, in contrast to other parts of the district, only a handful of responses to potential sites for development north and south of Lowestoft have been received.

Some 150 sites across Waveney have been included in the consultation, having previously been submitted to the Council by landowners, developers and other parties.  In south Lowestoft a proposal for a significant area has been put forward by a number of landowners working together. It includes a new road linking the A12 to the A146, together with housing (in the region of 2,000 homes), associated community facilities, employment land and sports and leisure development.

Meanwhile, in north Lowestoft, numerous pieces of land have been suggested which together could deliver approximately 2,000 new homes.

“Given that this is a hugely important piece of work which will play a crucial role in the future of the district, we are very keen to hear from people in all locations. Where do you think we should build?

There are some very interesting suggestions for the areas north and south of Lowestoft and we really do not want people to miss this opportunity to take part. Local contributions are a vital part of any decisions we take.”

People can respond to the consultation online or separately by email, and by post. 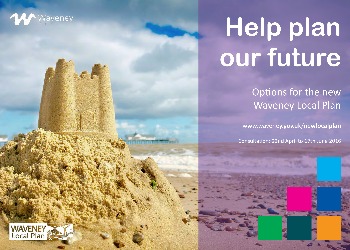