Felixstowe councillors are working together to support young people who are members of Felixstowe’s RAF Air Cadet unit.

Eight of Felixstowe’s ward members gave £7,750 from their Enabling Communities Budgets to

support the unit that is formally known as 356 (Felixstowe) Squadron, Air Training Corps.

The funding awarded from councillors Steve Gallant, Stuart Bird, Andy Smith, Richard Kerry, Doreen Savage, Tracey Green, Peter Coleman and Stephen Bloomfield will help the squadron to deliver expeditions for all cadets, including those participating in the Duke of Edinburgh (DofE) award scheme.

Currently the squadron has 35 cadets, who are all wanting to complete at least one of either the Bronze, Silver or Gold levels of the award.

Councillor Steve Gallant, local ward member for Felixstowe East, spoke on behalf of the group of councillors and said:

“Myself and my colleagues are really pleased to be able to support our local  young people.

“The opportunity to take part in the DofE award scheme builds confidence and self esteem and involvement in a cadet scheme is a great way for young people to make new friends, learn new skills and improve fitness and health.”

“We reinvigorated our DofE programme in mid-2016, but it has taken a little while to get the Expedition Section fully underway – especially for the relatively large number of cadets who have signed up.

“This much-appreciated funding has already equipped two practice expeditions that took place during the autumn half-term holiday and from next spring will simultaneously equip up to three group’s expeditions, the most time and resource-efficient approach.  As a result, we look forward to a host of our cadets earning the award of their first DofE badges by mid-2018.

“After the Town’s civic Remembrance Ceremony last Sunday, the cadets took the opportunity to express their appreciation to six of the councillors on the steps of Felixstowe’s Town Hall.” 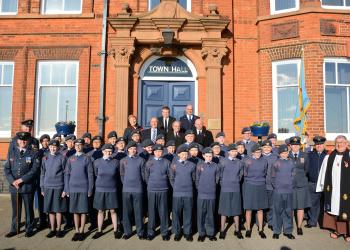