Home > Commemorative stone to be laid for Lowestoft hero

Commemorative stone to be laid for Lowestoft hero

A Lowestoft man awarded the Victoria Cross for his bravery during the First World War is to be honoured by the laying of a commemorative stone.

Across the country, commemorative paving stones are to be laid in the birth places of all Victoria Cross recipients from the First World War as part of a Government campaign to honour these heroes and provide a lasting legacy within their communities. The Victoria Cross is the highest award for bravery in the face of the enemy that can be awarded to British and Commonwealth forces.

628 Victoria Crosses were awarded during the First World War, including 145 for servicemen who fought for Britain but were born overseas. Amongst the recipients were two Lowestoft-born men, Claud Castleton and Thomas Crisp.

Waveney District Council, working with Sentinel Leisure Trust and the Royal Navy, will be holding a celebration event on Sunday 20 August in honour of Skipper Thomas Crisp VC, DSC, RNR. The event takes place 100 years after Thomas Crisp’s death during the defence of his vessel, the armed naval smack HM Smack Nelson.

“100 years after his death, we are honoured to be able to lay a commemorative stone to recognise the bravery of Thomas Crisp. The stone will enable younger generations and visitors to learn more about this inspirational Lowestoft hero and ensure his bravery is not forgotten.”

“It is a huge privilege to be a part of this special ceremony marking the centenary of a great act of selfless bravery by Skipper Thomas Crisp, Victoria Cross, Distinguished Service Cross, Royal Naval Reserve.

“Despite huge social and economic change over the past 100 years, certain things have remained the same. For example, maritime trade remains the lifeblood of our country, and this was especially true during the First World War. In addition, although today’s Naval Service is a fraction of the size it was a century ago, it continues to be made up of a rich mixture of individuals from diverse backgrounds, both regulars and, like Skipper Thomas Crisp, reserves. In this vein, it is particularly interesting to note that, on the day of the action that led to his VC, the 10-man crew of his boat included his own son as well as members of the RNR, two regular Royal Navy seamen and a Royal Marine rifleman.

“Thomas Crisp, and those like him, met their fate with a supreme sense of duty and they bore their hardships and dangers with enormous fortitude.”

Born in Lowestoft in 1876, Thomas Crisp was a commercial fisherman operating from the town. He joined the Royal Naval Reserve in 1916 and his knowledge of the local seas proved vital to the war effort. Skipper Crisp commanded the HM Armed Smack I'll Try, a small fishing vessel which were secretly armed with guns under tarpaulin.

Acting as bait, Skipper Crisp and his crew sunk a German submarine in January 1917, for which Crisp received a Distinguished Service Medal. In August 1917, the Nelson (formerly the I’ll Try), was hit several times by enemy fire, severely wounding Crisp. Despite his injuries, Thomas Crisp continued to give orders to his crew, including the order to abandon ship and save themselves. For his bravery and self-sacrifice, Thomas Crisp was posthumously awarded the Victoria Cross, which was presented to his son Tom Crisp Jr.

The ceremony begins at 11.15am at the Lowestoft Naval Memorial in Belle Vue Park and will be hosted by Cllr Ardley. 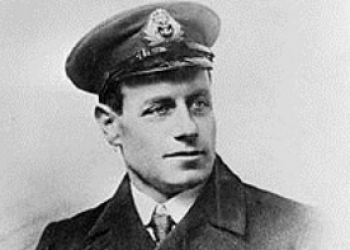