Suffolk Coastal is going green to reduce its impact on the environment.

Since moving into its new headquarters last year, Suffolk Coastal has invested in green technologies to reduce the council’s carbon footprint.

The newly built headquarters at Riduna Park have been built with green features to reduce their impact on the environment - and reduce running costs. It is hoped that the new building will  save Suffolk Coastal £70,000 a year in running costs, compared to their previously ageing head quarters at Melton Hill.

The two new buildings benefit from air source heat pumps for heating and feature a planted roof system which controls water run-off and improves the thermal performance of the buildings as well as supporting biodiversity.

With the new building comes a newly developed Green Travel plan to encourage improved access to staff and the public through public transport, car sharing, cycling and environmentally-friendly travel routes and methods.

This includes the investment in an electric car which is available for business use by Suffolk Coastal and Waveney District Councils staff. The battery powered car can travel up to 120 miles before needing to be re-charged and benefits from two electric charging points at East Suffolk House.

A new bicycle shed has also been built to house up to 40 cycles, with four loan bicycles, two purchased by Suffolk Coastal and two on loan from Cycle Suffolk available for use by staff.

“Since we have moved to our new headquarters we have taken lots of positive steps to reduce our carbon footprint.

“The new electric vehicle will be a great benefit to staff working here and we hope that if it and the loan bicycles are successfully used, we may consider further investment.” 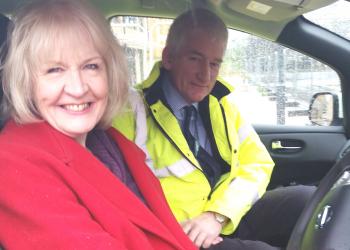