With plans for a multi-million pound scheme in place to protect local properties and businesses from the very real threat of flooding, local schools have risen to the occasion in a challenge to create an eye-catching awareness campaign.

Organised by Waveney District Council and the Lowestoft Flood Risk Management Programme (LFRMP) this year’s Children’s Commissioner Takeover Challenge saw around 100 pupils compete for prizes on a day of innovation and invention at the town’s Orbis Centre.

Pupils were asked to create a campaign which informed and educated people about flooding, across a range of ‘platforms’ for young and old alike and did so with huge enthusiasm.

The winning campaign was created by the Ormiston Denes Academy and, as part of their prize, they will actually work alongside the Lowestoft Flood Risk Management project team to make their idea into reality. Their ideas will be used to help communicate the project to local people until its completion in 2020.

As part of their campaign they came up with the idea of a cartoon character called the ‘Waveney Wellington’ – a fun and eye-catching welly-boot, providing important information for people in a new and engaging way.

“The Lowestoft Flood Risk Management Project is one of the most important projects happening in Lowestoft at the moment. One of the challenges the project team faces is communicating with people of all ages in different ways to get the message home.

“This ‘takeover challenge’ is a fantastic idea, educating young people about important local issues while also boosting the scheme by welcoming a raft of exciting and interesting ideas about engaging with local audiences.”

Waveney MP Peter Aldous was among the judges for the event and awarded prizes at the end, which also included other categories including Best individual team member and best team players.

“The standard of work produced by the schools was absolutely outstanding and it was a really interesting and informative day to be a part of. The schools had plenty of exciting ideas which will be taken forward but they also showed a level of understanding that really impressed all the judges.” 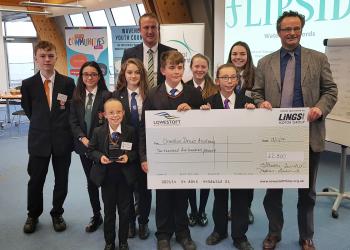