Tour of Britain comes to Suffolk

Newmarket and Aldeburgh will host the Suffolk stage of the OVO Energy Tour of Britain on Friday 8 September.

Stage Six of Britain’s premier road cycling race will take place entirely within Suffolk, a first for the county, heading east from Newmarket to the finish in the centre of Aldeburgh, on the Suffolk Coast, with the race again sponsored by Suffolk brewer Adnams.

“Adnams has supported cycling at all levels since 2011 so we are hugely proud to sponsor the Best British Rider at the EVO Energy Tour of Britain once again.

Having an entire stage in Suffolk is really exciting and doubly so for us as it starts and ends in towns that Adnams has a strong association with. The stage begins in Newmarket where Adnams has partnered with Newmarket Racecourses for many years, and finishes in Aldeburgh which is home to a number of our pubs and our Aldeburgh shop. We look forward to welcoming the riders and enthusiastic spectators later this year.”

Among the towns who can look forward to welcoming the world’s top professional cyclists during the 183-kilometre stage this September are Mildenhall, Bury St Edmunds, Eye, Framlingham and Woodbridge.

“The Tour of Britain will be a much loved fixture in Suffolk’s summer calendar. It is an event for everyone from cycling fans to families and school children. Whether you watch the race at the start, finish or along the route it promises to be a great day.

The race will not only bring people to Suffolk, it will encourage more people to take up cycling and live a more active and healthy lifestyle contributing to our ambition to make Suffolk England’s most active county.”

“We are delighted to see cycling returning to east Suffolk and Aldeburgh this September!

Cycling has been very much on the agenda in the District since we hosted the stage finish of The Women’s Tour in 2015 and hosting The Tour of Britain gives us a real opportunity to showcase Suffolk Coastal as a fantastic tourist destination, with the route travelling through the majority of our district.

Not only does The Tour bring great economic and tourism benefits, it importantly also reflects our ambitions to inspire more people to get involved in sport and encourage healthy living. We will be building on the success of 2014 to make this year an even bigger celebration of sport and sporting excellence.”

Suffolk has hosted Starts or Finishes of the OVO Energy Tour of Britain on four occasions since 2010, but this will mark the first time that the county has hosted both a Start, Finish and the entire route of a leg within its borders.

The event last visited Suffolk in 2015, when German sprinter Andre Greipel raced to victory in Ipswich.

“Having worked with Suffolk County Council since 2010 we are delighted that we now have the opportunity for a full stage of the OVO Energy Tour of Britain in the county.

This year’s route will enable us to visit new locations for the race, from the famous horse racing centre of Newmarket to the picturesque coastal town of Aldeburgh, via some of the areas most picturesque towns and villages.”

OVO Energy, the UK’s top rated independent energy supplier was recently announced as the title sponsor of the Tour of Britain. 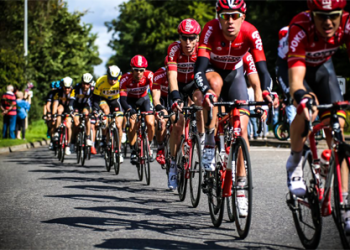