Having been one of the first local authority areas in the country to deliver universal credit to benefit claimants, Waveney District council Leader Colin Law welcomed the recent visit of Government Minister Damian Hinds MP to discuss the impact of the scheme.

Universal Credit is a new benefit which brings together six of the existing “legacy benefits” to simplify the benefits system and help ensure people are better off in work. It is paid as a single monthly payment, direct to the customer, similar to a wage.

Waveney was one of five councils in the country to first roll out the scheme, in May 2016, and Cllr Law, alongside Waveney MP Peter Aldous, met with Mr Hinds, the Minister of State for the Department of Work and Pensions (DWP) as well as staff at JobCentre Plus in Lowestoft, to talk through a range of issues related to universal credit.

“This council recognises the advantages of universal credit and the ambition to create a consistent and less complicated process for claimants. We will continue to work proactively with the DWP to support our customers and communities through the changes that are taking place. However it is important that we draw attention to concerns and we left the Minister in no doubt that there are issues which we feel should be tackled as soon as possible."

Among other things, Cllr Law asked Mr Hinds to consider concerns about delays in processing the housing benefit element of universal credit, handling temporary accommodation and the pressure on staff as the rollout is expanded.

“We feel that efforts should be made to ensure that these concerns are addressed promptly. We fully appreciate that this is a new service and that there are bound to be teething problems when trying to simplify a complicated system. However, our responsibility is to our communities and residents and we hope that our efforts to bring this to the minister’s attention will prove worthwhile.”

In addition, the Council has also written to Frank Field MP, Chair of the Work and Pensions Committee, providing data in relation to claims and waiting times, as part of his request for information from Councils who have rolled out the service. 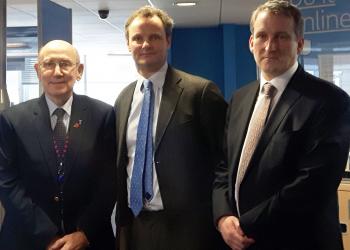