Plans for a brand new and exciting festival for Lowestoft, attracting up to 20,000 people to the town and celebrating local and international culture have been unveiled by Waveney District Council.

The idea for the ‘First Light Festival’ which could attract over £1 million of investment from Arts Council England and other trusts and organisations has evolved from the ongoing Lowestoft South Beach Vision project; a collaboration between internationally renowned designers Hemingway Design (led by Wayne Hemingway MBE) , Waveney District Council and other local partners and businesses.

It is an ambitious plan to create an event that would play a major role in making Lowestoft a ‘must visit’ destination, building a tradition that attracts thousands of visitors to Lowestoft during the festival. A review of other seasides has shown that festivals and events can bring ‘new’ visitor groups into towns and during the development of the seafront vision, it became clear that there was considerable community support for a significant festival in Lowestoft.

Working with Wayne Hemingway and his events team, the Flipside Festival and the arts lead for Suffolk County Council, the proposal for what would be an overnight festival has been worked up by the project group and Waveney District Council has agreed for the project group to seek Arts Council funding under the Ambition for Excellence programme.

An Arts Council grant would support a festival in 2019 and 2020 and would bring together a skilful network of local, regional and national organisations producing festivals including FlipSide, SeaChange and Hemingway Design. It would also lead to the delivery of a year-round programme of creative activity in Lowestoft and Waveney, that will culminate in the First Light Festival.

“The South Beach Vision Project is a truly exciting and innovative approach to boosting the local area and the idea for the First Light Festival makes a huge amount of sense.

There is a clearly a gap in the town’s cultural offering which such an event could fill and there is no doubt that it could create and build a hugely impressive reputation for Lowestoft and Waveney.”

“At Hemingway Design we have come up with a number of nationally significant festivals which are rooted in place and are totally original in their format.

First Light Festival is a truly unique, 24 hour long multi-arts beach and beach front festival that, as the sun rises, celebrates the UK’s ‘First Light’ of day on the seafront of Britain’s most easterly town.

I can’t wait to get started with the team on working up the detail on this and am counting down the days to a balmy and clear midsummer 2019!”

“We are hugely excited by the opportunity to develop First Light Festival, a major new festival for Lowestoft that will showcase the town's natural coastal assets and its unique position as the UK's most easterly location; working with local, national and international artists and with the community to create a spectacular festival for all the town.

“FlipSide has developed a strong relationship with schools and organisations in Lowestoft, delivering a raft of community projects, bringing the Brazilian Ambassador to the Summer Festival and most recently producing a new children's October half term festival - we look forward to working with all these partners on First Light Festival.”

The tourism economy is important to Lowestoft and the town currently sees 1.2m visits per annum, with 60% being repeat visitors, many of whom live within a 20 mile radius of the town. The total-spend into the local economy from these 1.2m visits is £74 million. In order to attract visitors and to ‘compete’ with other locations, it is necessary to improve the offer for visitors from a wider area.

Work was therefore undertaken to look at the experience of improving the offer in a range of areas including arts & entertainment and, public spaces, which supports the Making Waves Together aim to build cultural opportunities in Great Yarmouth and Lowestoft.  The Council commissioned Hemingway Design to lead on this piece of work and the project took a collaborative approach involving the business and arts community, built around a number of events and workshops.

Officers will now proceed to submit an ‘Expression of Interest’ to the Arts Council’s “Ambition for Excellence” funding programme and if successful in this stage, a full submission will be made to the fund in December 2017. A full delivery model and business case will then come to Cabinet for approval. 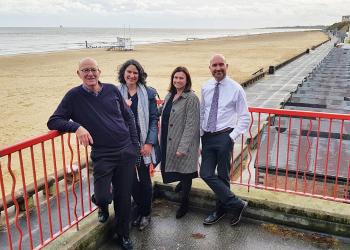