Suffolk Coastal and Waveney District Councils are reminding householders that they have a legal responsibility, or duty of care, to prevent their waste from being fly-tipped after a Saxmundham man has this week plead guilty to a waste offence.

He pleaded guilty to an offence of failing to fulfil his duty of care towards household waste contrary to Section 34(2A) of the Environmental Protection Act 1990 in March 2017 from his address.

The case was brought to court after twenty sacks of general, unsorted household waste which were found to have been fly-tipped on land at Bannocks Lane in Cransford, were examined and found to contain post addressed to Mr Williams’ home at the time.

When interviewed at the Suffolk Coastal Norse depot by Council Officers, Mr Williams stated that he had allowed an unknown person to remove waste from his address in Saxmundham, and admitted that the waste found fly-tipped came from his property. He also admitted failing to ask what was going to happen to the waste, failing to take any basic details of the identity of the person, and failing to check that the person was an authorised waste carrier.

Mr Williams plead guilty to breaching his Duty of Care towards his waste. The Court took into account Mr Williams’ circumstances and ordered him to pay compensation of £100.

Cllr Poulter, Cabinet Member for the Green Environment at Suffolk Coastal, said: “By failing to carry out his basic Duty of Care checks, this individual’s carelessness lead directly to a significant quantity of his waste being dumped in our beautiful countryside. This case serves to show that we will have no hesitation in taking action anyone found responsible for despoiling our beautiful district.

“I would therefore urge anyone who arranges for any waste to be taken away from their home by anyone other than the Council’s service partners Suffolk Coastal Norse or Waveney Norse, to remember the “Scrap Code”, to avoid being held responsible, and risk acquiring a criminal record, should their waste end up fly-tipped.”

The Suffolk Waste Partnership has produced a video aimed at householders, emphasising the importance of the Duty of Care and how to do their bit to prevent their waste ending up fly-tipped by rogue waste carriers and avoid risking a fine of up to £5000: www.youtube.com/watch?v=a1X83ka_AqQ

If you see someone fly-tipping in Suffolk Coastal or Waveney, please report it in confidence online at: www.eastsuffolk.gov.uk/waste/fly-tipping/how-to-report-fly-tipping

More information for Suffolk householders, landowners, and businesses about how they can help prevent and tackle fly-tipping is available on the Suffolk Recycling website: www.greensuffolk.org/recycling/fly-tipping 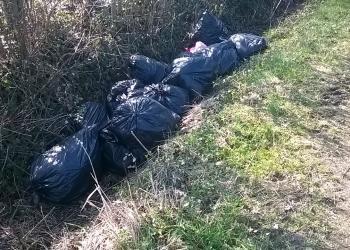