Women On Wheels returns to Rendlesham!

Women On Wheels returns to Rendlesham this October and this year we hope to get even more girls and women of all ages cycling in support of the Suffolk Royal British Legion Poppy Appeal!

The two rides taking place at Army Rock Barracks, Sutton on Sunday, 1 October offers an opportunity for all women and girls to get on their bikes to take on a challenge and have some fun!

Women On Wheels events are mass participation female only rides, raising money for local charities, that put a strong focus on the fun, friendly and inclusive aspects of cycling. They are very much aimed at non-cyclists and existing cyclists alike, with routes of an achievable distance, and are open to all ages.

Last year, a number of WoW events took place throughout Suffolk and rides are growing with popularity through the arrival of the Women’s Tour and Tour of Britain which comes to Suffolk on Friday, 8 September.

“With the success of the Women’s Tour over the last few years and the arrival of the Tour of Britain to the district this year, we hope it has inspired more people to take up cycling.

“Last year we had a lot of fun, and raised just under £500 for the Suffolk Royal British Legion Poppy Appeal!

“This year we hope to get even more ladies involved. You don’t have to be a pro cyclist or wear lycra - this is about getting girls and women of all ages together to have fun and raise money for a noble cause.”

You can also inspire others to join in on the fun on Facebook.

You can become a Poppy Appeal Volunteer. 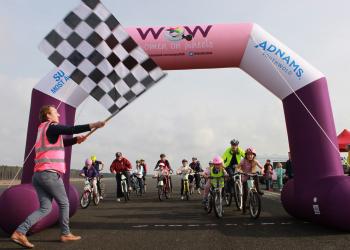