Waveney District Council is working as part of a multi-agency response to support local businesses and residents affected by a devastating fire in Halesworth on Monday 11 June.

Officers from the Council’s Building Control, Communities, Economic Development and Emergency Planning teams were on site on Tuesday 12 June and as part of the local recovery process, a meeting was held on Wednesday 13 June with local business owners to discuss the impact of the fire. The meeting was chaired by Chief Executive of Suffolk Coastal and Waveney District Councils Stephen Baker and attended by Cllr Tony Goldson, district and county councillor for Halesworth, as well as Karen Prime from Halesworth Town Council.

“We are now in the recovery stage for this incident, which has had severe consequences for several local businesses. We are working to support those businesses and the wider community to address any concerns and provide information and assistance where needed.”

“This has been a difficult and traumatic time for the owners of the businesses affected by the fire. Some have been trading from these premises for many years and the Council will be working closely with the business owners to get them back on their feet as quickly as possible.

“The community have really pulled together over the last 48 hours and I’ve been impressed by the strength and resilience shown by the businesses and the local community - we are working hard to relocate those who have been displaced by the fire and it is very much business as usual in Halesworth.” 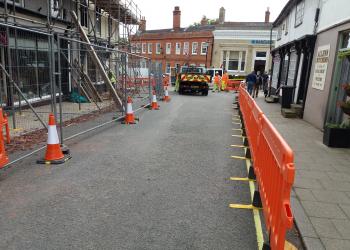