Posted by Waveney District Council on 3 May 2018 | Comments

Sue had served the Council as ward member for Southwold and Reydon for 14 years, which also included eight years as Cabinet Member for Housing and a two-year spell as Chairman of the Council. She served on a number of committees and partner bodies and was a hugely dedicated and popular public servant who was particularly loved in her home town of Southwold, where she also served two terms as Town Mayor.

Cllr Mark Bee, Leader of Waveney District Council paid tribute, saying: “I am both shocked and incredibly saddened to learn of Sue’s passing. She was an absolutely wonderful person; caring, generous and entirely committed to public service in Southwold and the wider district.

“She gave everything to seeking better outcomes for local people and communities and she will be deeply missed by everyone who ever knew or worked with her. She was both a good friend and an utterly professional councillor who genuinely sought to improve the lives of others and it will take some time to come to terms with this terrible news.”

Stephen Baker, Chief Executive of Suffolk Coastal and Waveney District Council said: “This is very sad news which I know will upset many staff considerably. Speaking personally, it has been an absolute pleasure to work closely with Sue at Waveney for over a decade. She was an outstanding and effective Cabinet Member as well as a thoughtful and community-focused Chairman.

“She was universally liked and played a lead role in a number of initiatives that have improved Waveney District Council and helped the people we serve. Sue’s focus and commitment to getting things done was second to none, and staff found her to be engaging, yet purposeful, and her humour and sense of mischief was so endearing.  All our thoughts are with Sue’s family and friends at this tragic time.”

Southwold Town Mayor Cllr Matthew Horwood said: “In Sue we have lost a Town Councillor and District Councillor who always put the Town of Southwold first, to try and get the best for the Town locally and across Suffolk. Thank you Sue for the many years of service you gave unstintingly. It will always be much appreciated and valued.”

Funeral arrangements will be confirmed shortly and a book of condolence is to be opened at Southwold Town Hall. 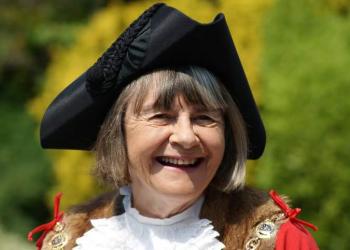