A ceremony has been held in dedication of a Lowestoft woman killed in the town during World War Two.

On 13 January 1942, 71 people were killed in the ‘Wallers Raid’ – a devastating air raid which saw four bombs dropped on London Road North in the town centre. Many shops were destroyed or seriously damaged, including R Waller and Sons restaurant where many of the victims were at the time of the raid and the former Marks and Spencer store.

Amongst those killed in the raid was 26 year old Gladys May Wright (nee Bull), who lived at Wollaston Road and worked at Marks and Spencer. Gladys, who had recently married, was acting as a warden and was trying to get staff and customers to safety at the rear of the store.

Clive Rougier, who works at Marks and Spencer, worked with Waveney Norse to organise today’s ceremony and arranged for a permanent headstone to be placed at Lowestoft Cemetery where Gladys is buried with her brother Jack. The stone was funded by Marks and Spencer and provided by Broadland Memorials.

The ceremony, held on 16 October, was attended by Gladys’ relatives, representatives from Marks and Spencer including Clive Rougier and members of the Jack Rose Old Lowestoft Society who assisted Clive with historical information. 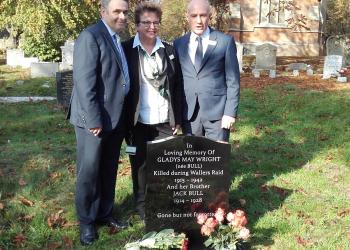