A derelict Lowestoft property closed due to unsafe living conditions has been transformed into affordable housing for single tenants.

Months of extensive renovation work at 560 London Road South have now been completed and the converted building was officially opened on Wednesday 19 September.

The three storey property had previously been occupied as an unauthorised multiple-use dwelling and takeaway business which was closed due to substandard conditions. Waveney District Council purchased the property and in 2017, began works to bring the building back into use.

In order to meet local need for quality accommodation for single people, the Council has transformed the building into the first council-owned 'house of multiple occupancy' (HMO) in East Suffolk. The scheme will house 6 tenants in private rooms with individual kitchens located within their rooms, with shared bathroom facilities and amenities.

Cllr Chris Punt, Waveney’s Cabinet Member for Housing said: “Following its closure, this property had become quite an eyesore which was detrimental to the local area and the Council felt it was appropriate to repurpose the building to provide affordable housing for local people. Many young single people struggle to afford self-contained accommodation and so these new rooms will help to address that need, with the ground floor accommodation suitable for those with low mobility.

“560 London Road South has been one of the largest refurbishment projects ever undertaken by our Housing and Projects teams and will be used as an exemplar scheme to educate and inform other private sector landlords in the district when creating future houses of multiple occupancy.”

The property will be managed by the Council in partnership with Solo Housing who specialise in supporting single people to independence.

On 1 October, new legislation comes into effect which requires landlords with properties with five or more occupiers, who are not related, to be licensed. Landlords are urged to submit their licensing applications before 1 October and anyone requiring further details is asked to contact the Council’s Private Sector Housing team on 01394 444506 or visit www.eastsuffolk.gov.uk/houses-in-multiple-occupation-hmos 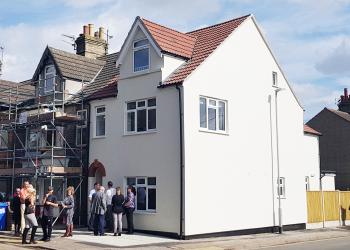