Home > News archive 2018 > East Suffolk gets the go ahead

East Suffolk gets the go ahead

The Rt Hon Sajid Javid, Secretary of State for Communities and Local Government has today agreed to the creation of a new ‘super district council’ for east Suffolk.

In a written statement issued on Thursday morning, the Secretary of State said:

“Having carefully considered all the representations I have received and all the relevant information available to me, I am today announcing that I have decided to implement, subject to Parliamentary approval, both proposals – that is to merge Suffolk Coastal and Waveney district councils to become a new single district council named East Suffolk.”

Welcoming the news, the Leaders of Suffolk Coastal and Waveney District Council, Cllrs Ray Herring and Mark Bee, said in a joint statement:

“This is a truly momentous decision for us and for the people of east Suffolk. Although this announcement is a national first, for us in east Suffolk it is the next logical step on a decade-long journey. We are used to breaking new ground, as we have been finding innovative ways to cut costs and manage our business since Suffolk Coastal and Waveney started working in partnership 10 years ago.”

“We have already made over £18million in efficiency savings and halved our joint workforce, while still investing in our communities. The creation of an East Suffolk Council will enable us to build on this decade of co-operation to give greater value for money, while continuing to improve service delivery.”

Suffolk Coastal and Waveney District Councils both voted to approve the proposal to create a brand new ‘super district’ council, delivering services to communities in the east of the county, in January 2017. A business case was then submitted to the Department of Communities and Local Government in February 2017.

In November, 2017, the Secretary of State for Communities & Local Government issued a written statement to the House of Commons confirming that he is ‘minded to’ support the proposals of Suffolk Coastal and Waveney District Councils to create a new single authority for the area.

At the same time, he has announced there would be a period of time, running until 8 January 2018, during which those interested could make further representation to him, including making any suggested modifications to the proposals. He has now considered all the comments he received and decided to officially back the plan, which will now be subject to Parliamentary approval.

This is the first time that the Secretary of State has given his backing to such a plan and now gives the councils the go ahead to proceed with getting everything in place to create the a new council by May 2019.

“We have a proud record of achieving success through innovative partnership working between Suffolk Coastal and Waveney District Council. We are glad that the Secretary of State has recognised this in agreeing the creation of this new ‘super district’ for east Suffolk,”

“We need to evolve, if we are to successfully address the shared opportunities and challenges that both councils face. There have been significant reductions in Central Government funding for councils, but we need to be able to drive and invest in growth and infrastructure projects, as well as providing more much-needed housing. “A larger, more influential East Suffolk Council will enable us to fulfill our potential in driving development, while keeping costs low.”

With the Secretary of State’s agreement, the new Council would come into being, and begin operations, following the local council elections in May 2019. The two existing councils will then be formally dissolved with elections to the new authority. 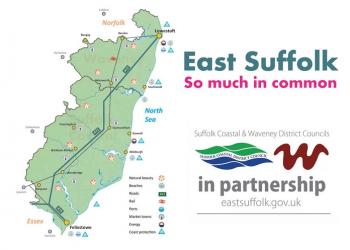