Every year over a quarter of all Halloween pumpkins end up being thrown away and in a bid to reduce food waste, Suffolk residents are being encouraged to learn more about ways to turn their pumpkin leftovers into tasty treats.

Halloween is now Britain’s third biggest commercial holiday, after Christmas and Easter, and the country’s second biggest party night after New Year’s Eve. But the spookiest side of Halloween is the shocking number of edible pumpkins that go to waste each year.

To raise awareness of what can be done with pumpkins, an interactive event will be taking place in Bury St Edmunds' Market Square on Wednesday 24 October between 10am and 4pm.

At the event, there will be delicious pumpkin soup to try and demonstrations on how to make tasty pumpkin treats at home. Representatives from the Suffolk Waste Partnership will also be dishing out top food saving tips and recipe cards. The event is a great opportunity for all the family to try out a new recipe and learn how to cook with their carvings and avoid the leftovers going in the bin.

“Food waste is a serious issue in Suffolk with the average family throwing away £810 of potentially good food every year. Think what you could do with that money? We’re literally throwing it in the bin!

“Our Food Savvy project is looking to tackle this problem by getting people to really think about the food they buy and eat. I encourage everyone to pop along to our fun Pumpkin Rescue event, try some delicious pumpkin soup and learn more. Together we really can make a difference”

“As Halloween continues to grow in popularity in the UK, it’s really important that this doesn’t create an ever larger mountain of food waste. We must recognise that pumpkins are a valuable source of food and not just for decoration, if we are to tackle the 7.3 million tonnes of food and drink wasted from British homes each year. Halloween is a great opportunity to help our children understand where food comes from and involve them in cooking a simple meal with their pumpkin carvings.”

Visit www.foodsavvy.org.uk/join-an-event/ for more details of the events and tips on carving and cooking your pumpkin. 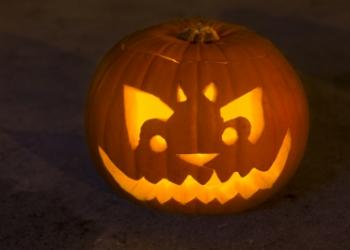