Suffolk County Council’s cabinet is being asked to agree its formal proposal for the Lowestoft Lake Lothing Third Crossing planning application to the Planning Inspectorate at its meeting on 19 June.

Once interested parties have registered to come forward, the Planning Inspectorate will have up to six months to carry out the examination – where interested parties will be invited to give their views. Within three months of the examination finishing, a report (complete with a recommendation) will be prepared for the Secretary of State for Transport, who has a further three months to make a decision and decide on whether to grant or refuse development consent.

The cabinet will hear of the overwhelming support from the people of Lowestoft for the crossing, following a seven-week consultation last year. Of the 1,469 responses received during the consultation period, 96% agreed the need for a scheme, 84% liked the look of the crossing, while 71% of those responding thought the proposals will reduce congestion in the Lowestoft area.

Cabinet is also being made aware additional money might be required for the project, to give the Planning Inspectorate and the Secretary of State reassurance the bridge will be funded as per the original agreement. However, early feedback from potential contractors shows that good construction management and value engineering could reduce the need for any extra funding. No extra money is being asked for at this stage.

“This is another big moment for the Lake Lothing Third Crossing project, Lowestoft, and Suffolk as a whole. “I’m delighted to hear of the unprecedented levels of public support for this project, and it also has the backing of all the key people, who remain committed to delivering this much-need crossing for Lowestoft.

“With the support of cabinet, we will be able to continue this project, which remains on schedule, and deliver something that will increase prosperity in Lowestoft, boosting the town’s economy and reducing congestion.”

“This is another significant milestone towards the completion of the Third Crossing. Government funding makes up most of the costs but local funding is also a significant element and demonstrates local support. Agreement by SCC cabinet is a clear signal of their commitment to this key project for Lowestoft and its economic future.”

“I am delighted that so much is happening in Lowestoft to deliver economic growth and better outcomes for our communities and the new Lake Lothing Crossing is integral to that. This is an another important milestone, showing that the project is on track and that local people support it.”

For more details about the crossing, please visit the Suffolk County Council website. 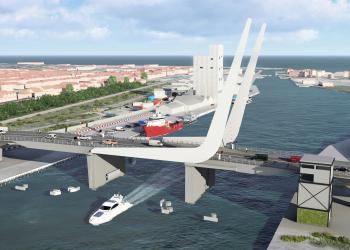