A project promoting the unique history of North Lowestoft has been promoted as part of a national celebration of heritage.

On Saturday 15th and Sunday 16th September, members of the Heritage Action Zone partnership were at Lowestoft Town Hall promoting the project and speaking to visitors in order to feed in to the project, understand their thoughts about local heritage and discuss the ambitions of the project, which includes the restoration of the Town Hall.

Cllr Michael Ladd, Waveney’s cabinet member for Economic Development and Tourism said: “The Heritage Action Zone enables us to celebrate and promote the unique history of North Lowestoft which in turn will improve the area for the local community, visitors and businesses and encourage growth. The success of the many Heritage Open Days events across Lowestoft shows the wealth of support for regeneration projects such as the Heritage Action Zone which embraces and celebrates the culture of the town.”

It has also been confirmed that Lowestoft Town Council, through the Heritage Action Zone partnership, has been awarded a grant of £42,000 from Historic England to enable emergency repairs to the Town Hall. The funding will also support a detailed condition survey of the building

More than 500 people visited the Town Hall over the weekend; visitors were able to look around the building and clock tower through tours provided by Lowestoft Town Council. Representatives from Historic England, which oversees the implementation of Heritage Action Zones across the country, were also present as were the Great Yarmouth Preservation Trust who were promoting the Scores improvement project which is to be delivered as part of the Making Waves Together scheme.

Cllr Alice Taylor, Lowestoft Town Council said: “This year’s Heritage Open Days brilliantly displayed the rich heritage of Lowestoft and certainly demonstrated the public’s enthusiasm and appreciation of all things historic in Lowestoft. The Lowestoft Town Council is extremely happy to support Heritage Action Zone partners as we work together to regenerate our unique town and preserve a rich legacy for future generations. Heritage looks to the past, but we are all working to the future and we can see wonderful things happening in Lowestoft."

Simon Buteux, Principal Adviser for Heritage at Risk – East of England, Historic England said: “This year’s Heritage Open Days at Lowestoft have been a huge success, and demonstrated the richness and variety of Lowestoft’s heritage. Speaking to people in the Town Hall, I was struck by the huge amount of enthusiasm for what the North Lowestoft Heritage Action Zone is setting out to achieve.  Working with our partners over the next five years, Historic England intends to build on that enthusiasm, providing grants and expertise to a range of projects that aim transform the old High Street, scores, parks and former beach village through heritage-led regeneration.”

The North Lowestoft Heritage Action Zone includes some of the oldest parts of the town. The area was originally the main medieval settlement, grown around the fishing industry, with merchants’ housing and commercial premises lining the High Street on the clifftop, whilst the buildings associated with fishing, such as net stores and workers cottages were on the lower ground area by the sea.

Find out more at www.historicengland.org.uk/LowestoftHAZ 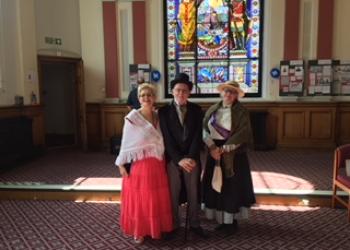