The second phase of the Suffolk Waste Partnership campaign to combat roadside litter is underway with the installation of remote devices to monitor bin fill levels.

The devices will be able to remotely monitor a variety of things including bin fill levels, most used bin and will calculate the number of days until a bin will be full. This will give operational staff more flexibility to schedule the emptying of bins when they are at their optimum fill level instead of being on a rigid emptying schedule.

The remote devices are the final part of the project which is utilising a £10,000 grant from the Government’s Litter Innovation Fund*.

New style bright orange bins have also been placed in laybys at known litter hot spot areas along the A11, A12, A14, A140 and A146. A fuel pump advertising campaign ran during June, council refuse freighters/sweepers are displaying the campaign messages and campaign banners/signs are popping up all over Suffolk.

The aim of the partnership campaign is to influence a change in behavior when people dispose of their litter, either using a litter bin or taking their litter home instead of discarding it onto the roadside verges. The increase in fines for littering of up to £150 is also being promoted and should also help to deter litterers, helping to keep Suffolk beautiful.

“The bins are being funded by a £10,000 award from the Government’s Litter Innovation Fund. It is intended to reduce and prevent litter through new methods tried before, which have potential for wider use if they prove effective.

“I’m very excited by what this project has the potential to achieve, namely reducing litter and the £300,000 annual bill for clearing it up on Suffolk’s major A-roads.

“People visiting Suffolk are likely to arrive using one of the main ‘A’ roads which is why it is so important that their first impression of Suffolk is a good one, and that those who live, work or travel here care about the way it looks.”

Suffolk Waste Partnership’s member authorities are responsible for clearing litter from public land and highways, with the cost of removing litter from Suffolk’s major A-roads the A14, A12 and A11 standing at £300,000 per year.

Three of the Suffolk authorities (Ipswich Borough Council, Babergh District Council and Mid Suffolk District Council) joined forces 10 years ago to create a specific team to clear litter from the A12 & A14 where it runs through their areas. Since then the team have cleared an average of 2 tonnes of litter each week.  In 10 years this would be the equivalent of 130 double decker buses.

The team spends their working week picking the litter from the verge sides of these major roads and have found all sorts during their 10 year span; kitchen cabinets, caravans, a fake arm and on one occasion, even a small dog.  A dog in the bin was a huge shock for the team. However, the end result was good as Jason, the operative who was first to spot the dog, was able to keep him. He named him Dusty and still regularly gets asked how he is. 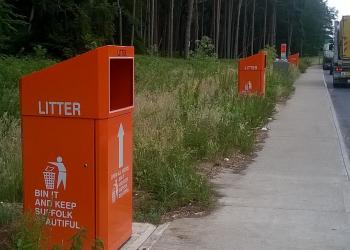