Tea, homemade cakes and sunshine were on the menu as Lofty Heights laid on a ‘thank you’ tea party for fundraisers.

The Community Interest Company needed to raise funds for a new and larger van to replace a smaller one which was costing increasingly more to keep on the road.

They started the ‘Plea for Percy’ campaign which was successful and enough money was raised to purchase the new van, named Percy.

Amongst supporters of the campaign are Suffolk Coastal’s new Chairman, Nicky Yeo and Cllrs Stuart Bird and Doreen Savage, who has made donations through their Enabling Communities Budget.

Olive Quinton, founder of Lofty Heights, said “The support and donations we have received has already made a huge difference to what we can do.

“Not only are we able to take on bigger jobs now and thereby helping more people, we are able to work more cost efficiently, meaning we are now looking into expanding the team and help more young people into employment.

“In Percy’s first two week, he has already saved two customers £60 on van hire and another customer saved an hour’s time, as we only needed to do one trip instead of two due to the larger size.” 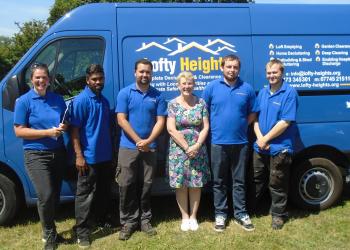