Home > News archive 2018 > Residents reminded that rubbish is their responsibility

Residents reminded that rubbish is their responsibility

Householders in east Suffolk are being reminded of their legal responsibilities to ensure their waste does not become fly-tipped, following the successful prosecution of a Suffolk resident.

Donna Last of Riverside Road, Ipswich appeared at Ipswich Magistrates Court on 20 February, where she pleaded guilty for failing to fulfil her Duty of Care towards household waste contrary to Section 34(2A) of the Environmental Protection Act 1990. Ms Last was ordered to pay a total of £830.

The case was brought to court by Suffolk Coastal District Council after several sacks of general, unsorted household waste were found fly-tipped at Monument Farm Lane, Foxhall in August last year. Upon investigation by Council officers, the waste was found to contain correspondence linked to Ms Last’s previous address.

When interviewed by Council officers, Ms Last stated that she was approached by unknown persons offering to remove waste metal from her property. She then asked them to take away her rubbish for a small payment. She admitted failing to ask what was going to happen to the waste, failing to take any basic details of the identity of the person, and crucially, failing to check that the person was an Authorised Waste Carrier.

In a joint statement, Cllr Carol Poulter, Cabinet Member for the Green Environment for Suffolk Coastal and Cllr Graham Catchpole, Waveney’s Cabinet Member for Operational Partnerships said: “This case shows the serious consequences of failing to carry out basic legally-required checks before allowing someone to take rubbish away from your home. This carelessness led directly to a large quantity of waste being dumped in our beautiful countryside and resulted in significant court costs and a criminal record.

"We have no hesitation in taking action against anyone found responsible for despoiling our environment, as this case clearly shows. Residents are reminded that their rubbish is their responsibility and anyone arranging for any sort of waste to be taken away from their home by anyone other than the Councils’ commercial service partners Suffolk Coastal Norse or Waveney Norse must check their waste carrier registration details to avoid being held responsible should their waste end up fly-tipped.”

In court, Ms Last pleaded guilty to breaching her Duty of Care and was fined £50. She was also ordered to pay the Council’s full costs of £650, £100 compensation, plus a victim surcharge of £30 – a sum totalling £830, which was ordered to be paid by way of deduction from benefits.

Residents are asked to remember the ‘Scrap Code – Suspect, Check, Refuse, Ask, Paperwork’ before allowing anyone to remove waste on their behalf: 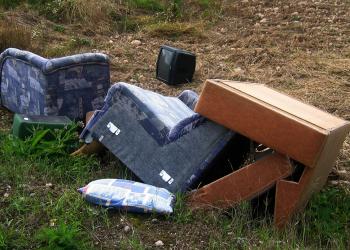