Schools show their support for the Women's Tour

With just one week to go until the OVO Energy Women's Tour arrives in east Suffolk, local school children have been getting ready to show their support.

On Wednesday 13 June, some of the world’s best cyclists will arrive in east Suffolk for the opening stage of the OVO Energy Women’s Tour. The ‘Grand Depart’ of this hugely prestigious race gets underway in Framlingham with Stage One following a 130km route through Suffolk – heading to Woodbridge, Ipswich, Stowmarket and Halesworth, before finishing at North Parade in Southwold.

The winning poster was designed by Erin Burgess of Reydon Primary School with Milly McCartney and Southwold Primary pupil Millie Cashell as runners up.

Children from the schools will also be taking part in races on North Parade ahead of the arrival of the elite racers on 13 June.

East Suffolk residents are also invited to test their cycling abilities in a sprint competition on the finishing straight. Starting at midday, competitors will battle it out to be the fastest rider to complete the 100m uphill sprint section on North Parade. Find out more and register for the competition here.

Seventeen days on from the opening stage of the race, the OVO Energy Tour Ride, supporting Breast Cancer Care, will take place in Southwold on Sunday 1 July.  Riders can choose from a 30-mile Challenge route or 80-mile Pro route, each featuring the same roads as used by the professionals in Stage One. For more information and to enter, please visit www.tourride.co.uk 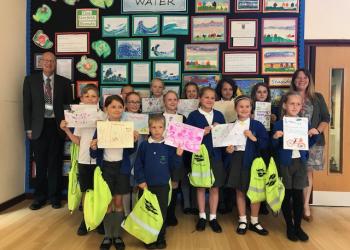