Fifteen 'smart' litter bins are to be installed in trial locations across Suffolk in an effort to reduce littering on the county’s trunk roads.

The customised bins are designed for roadside use and feature an illuminated solar-powered 'litter' sign, a wider than usual aperture to make disposal of rubbish easier, bright orange bodies, reflective white signage and the clear message ‘Keep Suffolk Beautiful’.

The design aims to make the new litter bins more visible to any drivers using laybys in the trial locations at both day and night time.

The bins will also be fitted with remote monitoring devices to help councils coordinate the emptying of these bins more efficiently and effectively. The devices will be able to monitor bin fill levels and will send an alert once a pre-set level has been reached so that they can be emptied at the most optimum time.

"The bins are being funded by a £10,000 award secured by Forest Heath on behalf of all the Suffolk Waste Partnership from the Government’s Litter Innovation Fund. It is intended to reduce and prevent litter through new methods tried before, which have potential for wider use if they prove effective. Our successful bid was for this local project aimed at reducing litter and the £300,000 annual bill for clearing it up on Suffolk’s major A-roads."

The Suffolk Waste Partnership’s project is also asking local businesses to support ‘Keep Suffolk Beautiful’ by displaying banners and signs on fuel forecourts across the county.

More standard bins are also being installed as part of the campaign at other trial layby locations along the A11, A12 and A14 in Suffolk, to see if the increase in number and the type of litter bin provided results in less litter. 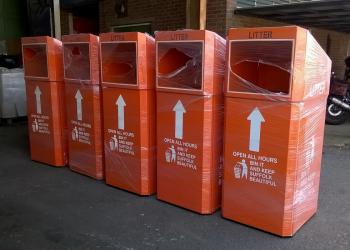