Posted by Waveney District Council on 9 May 2018 | Comments

After weeks of preparation, residents of a Lowestoft street have gathered for a street party to bring people together and help get to know their neighbours.

On Sunday 29 April, residents from Tedder Road in Lowestoft enjoyed a street party, organised by a group of volunteers from the street, with support from the East Suffolk Communities Team.

Despite the rain, approximately 65 residents attended the party, along with Cllr Mary Rudd, Waveney’s Cabinet Member for Community Health and Safety and Cllr Alison Cackett, Deputy Cabinet Member for Merger and Communities who judged competitions and presented prizes, which were donated by the residents themselves. Representatives from Great Yarmouth and Waveney Mind and Lowestoft Ogogo were also present at the party to raise awareness of their services.

“Street parties are a great way to get to know your neighbours, improve community spirit and have fun right on your doorstep. The Tedder Road party was a great success and I hope it inspires others across Waveney to organise their own parties.”

Many of the competition prizes were donated by Tedder Road resident Brian Clarke, who sadly passed away shortly before the party. A letter from Brian’s step-daughter Susan Shephard, who also volunteered with the street party arrangements, was read out at the event by Lowestoft Communities Officer Rachel Tucker.

“The Tedder Road residents worked together for several months to plan the party, which was greatly enjoyed by all who attended. We are especially grateful to the late Brian Clarke and his family who contributed to the party; the Communities Team would like to express their sincerest condolences to his friends and family.”

A raffle, organised by Susan along with volunteers Allison and Gabriel Sanford and David and Denise Smith, raised £100 which will be donated to a local cancer charity in memory of Brian.

Anyone wishing to organise a street party can contact rachel.tucker@eastsuffolk.gov.uk or call 01502 523111. 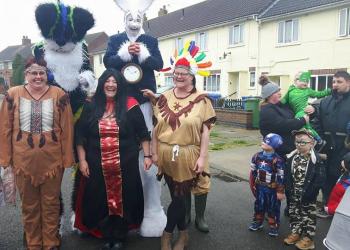