Ninety-six of the world’s best female riders will line up in Beccles on Monday 10 June to tackle a 157.6-kilometre (98-mile) route that will take in the northern and central parts of the county before finishing in Stowmarket. Fans watching the action unfold at the finish on Ipswich Street will benefit from seeing a field comprising Olympic, world and national champions pass through the line twice during the stage.

The opening stage of Britain’s longest-running professional women’s race - which forms part of the prestigious UCI Women’s WorldTour series - will notably pass through Bury St Edmunds and Framlingham, both of which have previously hosted the event’s Grand Depart (2015 and 2017 respectively).

Today’s announcement coincides with International Women’s Day and was celebrated with a launch event at the historic Eye Castle this morning. There was also confirmation that, for the second year running, the race’s prize fund will match that of the OVO Energy Tour of Britain to continue on the path towards gender equality in cycling.

“I am delighted to unveil the route of the 2019 Grand Depart in Suffolk, especially given the amazing response generated by the announcement of our return to the country last month. We’re looking forward to visiting Beccles and Stowmarket on a route that will see the race take in a mix of familiar roads to the event, as well as many new towns and villages that have been crying out to feature.”

“This is our third year sponsoring the OVO Energy Women's Tour, helping to enable a free-to-view sporting event to be brought to fans across the UK. Last year we announced the top cyclists at the Women's Tour would compete for equal prize money, taking a meaningful step towards gender parity in cycling. We're proud to have committed to matching the prize money again, helping to provide an equal platform and inspiring more women to ride bikes.”

“The Women’s Tour coming to East Anglia this year is exciting for me as a racer but also inspirational for local cyclists. It will definitely encourage more people to jump on their bikes and even have a go at riding the route, as well as providing so many locals with the opportunity to enjoy the spectacle from the roadside.

I think it will give our sport some great exposure within the region, and I’m really looking forward to seeing that. It should be a brilliant day of racing, and hopefully there will be some nice weather to match”

“It’s significant that we are announcing details of the OVO Energy Women’s Tour Grand Depart in Suffolk on International Women’s Day and we very much hope that the race will inspire women and girls across Suffolk.

This event provides a fantastic opportunity to showcase Suffolk to an international audience, while engaging communities across the route from Beccles to Stowmarket to get on their bikes, get active and help us to make Suffolk the most active county in England.”

“We are delighted that the OVO Energy Women's Tour will once again be coming to East Suffolk and especially pleased that the Grand Depart will take place in Beccles for the first time. We are looking forward to working with local schools, businesses and the community to really get behind the event and show our support for some of the world's best riders as they race through our towns and villages.”

Also unveiled at the launch was the OVO Energy Women’s Tour’s link-up with the Suffolk-based Blossom Charity, who will become the event’s first-ever Community Partner.

“We are thrilled to be the first Community Partner for the OVO Energy Women’s Tour. As a charity we support women to achieve their dreams, build their confidence and be their best, all of which are goals clearly aligned with the event.

We will be following the route of the tour; we hope to work with 500 women over the six days, offering training and goal-setting at each stage. The team are already preparing and are looking forward to this year’s race.”

Almost 70% of spectators surveyed following last year’s opening stage, held between Framlingham and Southwold, said that the event inspired them to cycle more often. The race will also return to the county in 2020, as Suffolk County Council and the East Suffolk Councils have partnered with event organisers SweetSpot Group in a two-year deal.

Further details of this year’s OVO Energy Women’s Tour, including the full race route and competing teams, will be released in the coming weeks. 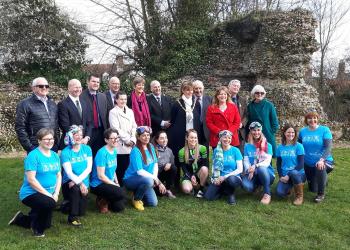