To celebrate the Grand Depart of this year’s OVO Energy Women’s Tour, a special festival will take place in Beccles.

On Monday 10 June, 96 of the world’s best female riders will line up in Beccles to tackle a 157.6-kilometre (98-mile) route through Suffolk, before finishing in Stowmarket. This is the first time Beccles has hosted the race and to commemorate the event, a special festival will be held on Sunday 9 June.

To start the day, the 7th annual Beccles Triathlon begins at 8.30am at Beccles Lido and will feature seasoned and novice triathletes. The competitors will complete a 480m swim (16 lengths of the Lido), followed by a 20.3km (12.6mile) cycle route through Gillingham, Geldeston, Ditchingham and through the Waveney Valley back to Beccles. The race concludes with a 6.7km (4.1mile) run via Beccles Quay and along the Waveney River towpath. Trophies are available for the fastest man, fastest woman and fastest team, as well as age group prizes.

This year's triathlon is now fully booked for entries however there is a waiting list for anyone wishing to take part. Spectators are welcome and so please come and show your support for this popular event, which kicks off this cycling-themed day.

Once the last triathletes have crossed the finish line, everyone is invited to come up to the town centre for the festival, taking place between 12pm and 4pm in and around New Market. There will be live music from The Larks, Distant Sun and Cameron Taylor, an opportunity to have a go on a mobile skate-park and displays from freestyle bike team, Savage Skills. There will a variety of stalls from the local community including Suffolk Police, Great Yarmouth Cycle Club, East Suffolk Council, Snap Fitness and Ultimate Boxing and also a mini food market. It is also hoped that some of the professional Women’s Tour teams will also be in attendance, ahead of the first day of the race - which forms part of the prestigious UCI Women’s WorldTour series.

More information about Stage One of the OVO Energy Women’s Tour, including the full race route and competing teams, can be found at www.womenstour.co.uk/stages/stage-1

Find out more about Beccles Triathlon at www.becclestri.com 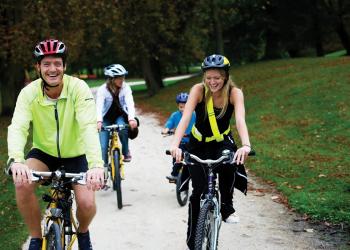