Cavendish Park and Gosford Way play areas were officially reopened last week (Wednesday 7 August) to mark the completion of a £265,000 project to improve the facilities.

Around 150 people attended the reopening, which was led by Felixstowe Mayor, Cllr Nick Barber who cut the ribbon and opened the gate for the many children waiting to try out the new play facilities.

The play areas have been fully refurbished with a range of items suitable for toddlers, juniors and teenagers. Cavendish Park has a new Multi-use Games Area and the play equipment at Gosford Way has been replaced with 14 new pieces.

The project also includes improvements to Allenby Park play area, which reopened today, (Monday 12 August). This includes replacing and widening of the 5-a-side pitch and additional equipment added to the existing play area.

“I am delighted that these play areas are now open for children to enjoy. We had a fantastic turnout at the officially reopening and great feedback from the people who will be using the areas – the children!

Work on the project started in May after Felixstowe Town Council, East Suffolk Council and Suffolk Coastal Norse worked together to identify the three play areas in need of an upgrade as part of on-going investment in the area.

“It was a great event, many hundred’s attended. All the three play areas will be great assets to our town and countless of hours of fun for our children.” 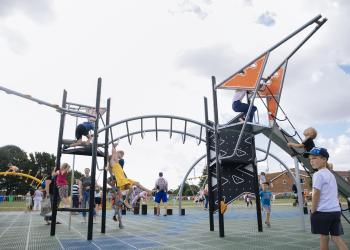