Work to demolish a row of beach huts in Lowestoft which were closed due to safety concerns is set to begin next week.

Demolition of the Jubilee Terrace chalets, which were closed due to structural issues in 2016, will begin on 14 January and once these have been removed, contractors will then begin the process of strengthening the cliffs using a tie system. When this work is complete, the temporary fencing will be removed and the pedestrian walkways will be reopened to the public, allowing full access and improving the appearance of the area.

“We are pleased that the demolition of these chalets is about to begin and that once the work is complete, the area will be much more welcoming and enhance the overall appearance of the seafront.

We are continuing to explore options for this area and it is expected that plans for future redevelopment will be taken to Cabinet later this year.”

This work is part of the wider seafront vision for Lowestoft's South Beach, produced by international designer Wayne Hemingway MBE. The vision, which builds on the priorities of the Lowestoft Coastal Community Team, highlights the potential opportunities the area could offer and looks at redevelopment of key spaces. 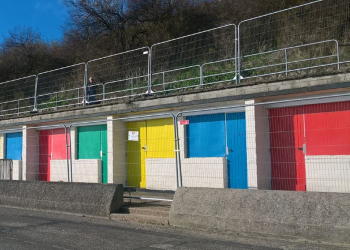