Two years ago, in January 2017, the two previous councils agreed to create a new, ‘super district’, to deliver services to communities across east Suffolk and now, after 11 years working in partnership the two have become one.

The councils were long recognised as innovators, working in partnership since 2008. They already boasted a fully integrated workforce, which enabled them to save over £22 million since 2010, keep council tax low and yet still enjoy a reputation for high standards.

However, both councils understood how important it was to not stand still and have now created a powerful and influential local authority delivering vital services for communities from Lowestoft in the north to Felixstowe in the south.

“This is a momentous day. On the one hand we have now introduced a major change to local government structure that has never before been achieved in this way, and yet it will very much be business as usual.

We will continue to work and deliver services much as we have been doing - carefully, diligently, efficiently, united around our shared values. However, the process of change will continue. On May 2nd a new council for East Suffolk will be elected, heralding a new era for democracy in our area. We will continue to work to serve our communities, of every sort, responding to new opportunities and challenges as they arise.

However, we have proven that we can deliver fundamental change and transformation, and I am confident that given the team we have in East Suffolk Council we can, and will, continue to do so. It is an honour and a privilege to be the Head of Paid Service for such a remarkable and dedicated team of people.”

The new Council is the largest district council in the country – serving a quarter of a million people. There will be no staff redundancies as a result of the change, however there will be a reduction in the number of councillors - dropping from 90 to 55 across the single East Suffolk area. Elections to the new council will take place on May 2nd.

The new council will still operate from the existing offices in Lowestoft and Melton, with council meetings taking place at both sites and, occasionally, in other locations. Meanwhile our Customer Services centres are still operating at the Marina Centre in Lowestoft town centre and at the libraries in Beccles, Felixstowe and Woodbridge. Additionally a new, local rate telephone number – 03330 162 000 – has been created for the new Council. 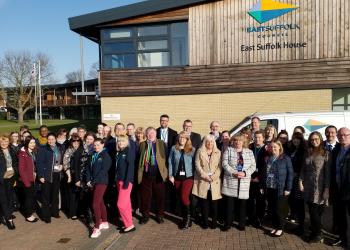