The Plastic Action Champions scheme aims to encourage more people to learn about their environmental impact, take action to reduce their plastic waste and spread the word on environmental issues. Volunteers are invited to attend a training session to become a Plastic Action Champion and following the success of previous sessions in April and June, further training sessions will be taking place in July.

There are now 40 Plastic Action Champions in place across East Suffolk; an incredible 22 of these volunteers signed up during the First Light Festival last month after speaking with East Suffolk Council’s Environmental Sustainability Officer Daniel Wareing and Jason Alexander, from Rubbish Walks.

Throughout the festival, council officers, Jason Alexander, Plastic Action Champions and other community volunteers carried out regular litter picks and also organised a mass beach clean at the end of the festival. Along with regular bin collections from East Suffolk Norse, Lowestoft’s award-winning South Beach was kept as clean as possible throughout the festival and was returned to its usual excellent condition after the event.

“Thanks to the hard work of volunteers, working alongside our partners East Suffolk Norse, Lowestoft’s South Beach had minimal litter during the First Light Festival. The majority of those attending the festival disposed of their waste responsibly and any litter was removed from the beach promptly by volunteers, including a number of Plastic Action Champions.

We received an amazing response from visitors to the festival who were keen to learn more about litter picking, beach cleans and reducing plastic waste. We are delighted that so many people have signed up to become Plastic Action Champions as a result of the First Light Festival and hope that even more volunteers will come forward to join our next training sessions.

We can all help to tackle environmental issues such as plastic waste, starting in our homes by reducing the amount of plastic we use. However we can really make a difference by getting whole communities involved. Becoming a Plastic Action Champion is ideal for those who want to take further positive action and help others within their community to become ‘plastic clever’ through advice, activities and education.”

The role of a Champion includes volunteering in their local community for a minimum of 20 hours annually. This can include reaching out to local community groups and businesses, exhibiting at local events, blogging about relevant topics, and organising litter picks and surveys.

Those interested in becoming a Plastic Action Champion are invited to book a place on one of the following sessions (subject to demand):

The training is provided by the Greenprint Forum and Jason Alexander from Rubbish Walks. Ongoing training, a comprehensive ‘Plastic Action Handbook’, support and travel expenses will be provided through the scheme.

The scheme is part of the Greenprint Forum’s ongoing Plastic Action campaign which is part funded by the East Suffolk Partnership and the Suffolk Coast & Heaths AONB Sustainable Development Fund.

The East Suffolk Greenprint Forum is a voluntary network open to all and facilitated by the Council. It aspires to improve the quality of life in the district while reducing the impact on the environment.

For more information about the Greenprint Forum, go to www.eastsuffolk.gov.uk/east-suffolk-greenprint-forum 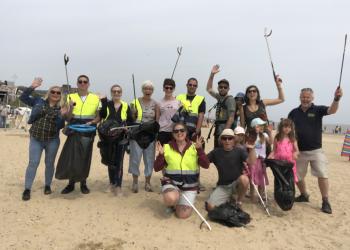