The East Suffolk and Ipswich Building Control Partnership is celebrating after winning two awards in recognition of their excellent collaborative work with local builders, architects and developers.

The Eastern Region Local Authority Building Control (LABC) Excellence Awards took place on Friday 5 July at St Andrews Hall in Norwich and having been shortlisted in nine categories, the team won the ‘Best Social Housing Development’ for the Duncan’s Yard development in St Edmunds Road, Southwold with contractors RG Carter and Orwell Housing. The team also won the ‘Best Local Builder’ award for their work with Elphick Buildings Ltd, from Shadingfield. Steven Elphick was present at the ceremony, accompanied by his wife, to receive the award.

The team were also highly commended for the ‘Best Building Control Partnership with a Local Authority Building Control Team’ and ‘Best Commercial Building’ awards (for the offices of Birketts on Princes Street in Ipswich along with contractor SEH French and BCR Infinity Architects.)

“These awards reflect the excellent work being undertaken by our Building Control officers, working closely with local building contractors, architects and developers to ensure new developments within East Suffolk and Ipswich are safe and fit for purpose.

This year saw the highest ever number of nominations to the Eastern Region, so for our team and clients to be shortlisted for nine awards is an exceptional achievement.”

The team, along with representatives from Elphick Buildings and the St Edmunds Road development, will now be invited to the national LABC Building Excellence Awards in London on 8 November.

Within the past year, the team has received other awards including LABC Superstar (Colin Dolden), LABC Rising Stars (Emily Bowman and Alex Deakin) and officer Danny Clarke has recently achieved his full Chartered Surveyor status. 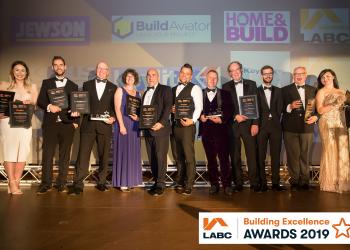