Suffolk will host the opening stage of the 2019 OVO Energy Women’s Tour on Monday 10 June, marking the fifth time that the race has visited the county.

The county also becomes the first venue to be confirmed for the 2020 edition of the race, with the news that Suffolk County Council and the East Suffolk councils will partner with event organisers SweetSpot Group in a two-year deal to bring the UCI Women’s WorldTour event to the county in both 2019 and 2020.

“We are delighted to welcome the OVO Energy Women’s Tour back to Suffolk for a fifth year, and our fourth time of hosting the Grand Depart.

“We are proud to have secured the race in Suffolk for this year and next. This is in no small part due to the success of the previous stages hosted in Suffolk and the strength of our relationship with the race organisers, SweetSpot.

“The Women’s Tour and events like it all contribute to our ambition to make Suffolk England’s most active county. I hope that this year’s race inspires even more people to take up cycling and take part in the wide range of events Suffolk has to offer, such as Women on Wheels as part of an active and healthy lifestyle.  It is always a much-celebrated event in Suffolk’s Sporting Calendar, greatly enjoyed by local communities.”

“It is incredibly exciting that the OVO Energy Women’s Tour is returning to East Suffolk for both 2019 and 2020 as we know our local communities, businesses and schools enjoy getting involved in this sporting spectacle. We are committed to increasing people's participation in sport and the Women’s Tour will no doubt inspire more people to take up cycling and improve their health and wellbeing.”

Almost 70% of spectators surveyed following last year’s opening stage, between Framlingham and Southwold, said that the event inspired them to cycle more often.

“We are delighted to be able to confirm that Suffolk will host the OVO Energy Women’s Tour in both 2019 and 2020.  Suffolk have been involved as a host venue since the first edition in 2014 so the extension of our partnership for a further two editions of the race shows the support in the county for the event and their aims to get more people more active.”

This June will mark the fourth time that the OVO Energy Women’s Tour has begun in Suffolk with Bury St Edmunds, Southwold and Framlingham having each hosted the Grand Depart of Britain’s biggest women’s pro-cycling race.

Further details of the 2019 Suffolk stage, including the Start and Finish venues for Stage One, will be announced in early March, ahead of the announcement of the full route for the OVO Energy Women’s Tour. 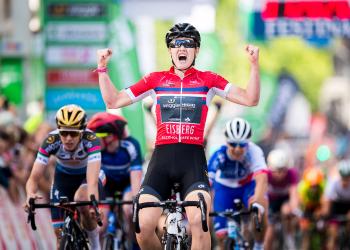