A charity fun run is set to return to a military base near Woodbridge this month in support of the armed forces community, past and present.

The third Honour Run, organised by East Suffolk Council and the Suffolk branch of the Royal British Legion (RBL), will set off from Rock Barracks on Sunday, March 13.

New for 2022 will be a half marathon distance, along with the established 5km and 10km runs, which people can choose to walk, jog, or run to raise funding for the Poppy Appeal. This is a unique opportunity to run within MOD Woodbridge, and with some of the route on the historic runway, it’s one not to miss.

In previous years, Honour Run participants helped to support former and current service personnel by raising more than £3,500 for the appeal.

With East Suffolk Council committed to promoting physical and mental well-being, the Honour Run provides a great opportunity for people to take part in an organised sporting event for a good cause.

Rock Barracks is home to soldiers whose regiment provides engineer support to two Royal Engineers Regiment and was granted the Freedom of Woodbridge in 2006.

Anyone who would like to help out, without taking part, can volunteer to assist with the running of the event by emailing activecommunities.scdc@eastsuffolk.gov.uk or calling 01394 444652. 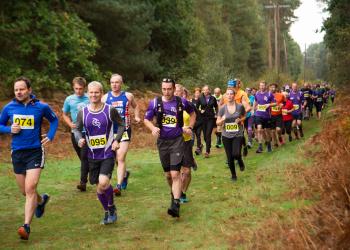