A new plan for Lowestoft’s town centre has been revealed by East Suffolk Council, to guide future development and act as a blueprint for positive change within the heart of the town.

The Lowestoft Town Centre Masterplan presents a response to the challenges faced within the town and is a catalyst to secure inward investment for the further development of the town centre.

Developed through stakeholder workshops with representatives from across Lowestoft, the masterplan will act as a ‘blueprint for change’ over the next 10 to 15 years. It provides a singular vision and direction, as part of the wider Lowestoft Place Board ambitions for the whole of the town.

Lowestoft already has significant advantages, with massive economic opportunities presented through the growth in offshore renewable energy, tourism attractions along the South Beach and a range of large-scale infrastructure projects on the horizon, including the Lake Lothing Third Crossing and the tidal flood defences.

In a joint comment Cllr Steve Gallant, Leader of East Suffolk Council and Stephen Javes, Chair of Lowestoft Place Board said: “Lowestoft not only enjoys a rich history and heritage, it is also an ambitious town with a future full of promise and potential. In order for Lowestoft to thrive, it is essential to have a prosperous town centre with a clear plan for positive change.

“This forward-thinking masterplan provides this vision, based on what our stakeholders have said will give confidence to businesses, consumers, funders and investors in Lowestoft. Within the last few weeks, we have secured £43 million of funding for flood defences and a further £750,000 for the regeneration of the East Point Pavilion and the masterplan will be used to support future funding bids which focus directly on the town centre such as the Future High Street Fund and the Towns Fund.

“Lowestoft has an exciting future and we are determined to ‘restart’ the town centre, especially in light of Covid-19. Setting the town on an ambitious pathway to success could not be more timely.”

Frazer Osment, Chair of LDA Design said: “Lowestoft is a unique place with great heritage and unrivalled coastal location, surrounded by nature. The welcoming, strong community made work on the masterplan a great experience. We have been hugely impressed by the energy and commitment of everyone who contributed. The masterplan sets out a positive future for the town centre and will play a key role in ensuring Lowestoft bounces back from the current crisis.”

The masterplan sets out a comprehensive programme of proposals underpinned by four themes: climate, social, health and well-being and economic / technological changes. As well as looking ahead, it also incorporates more short-term activity which will help attract jobs and businesses to the town centre.

The successful delivery of the masterplan, which will be supported by the Lowestoft Place Board, will be reliant on strong partnership working between both the public and private sectors and the adoption of a flexible planning policy framework that enables change to take place.

The Lowestoft Town Centre Masterplan can be viewed at www.eastsuffolk.gov.uk/ltcm

Property developers, landlords and organisations are invited to discuss the masterplan and its opportunities by emailing economicregeneration@eastsuffolk.gov.uk 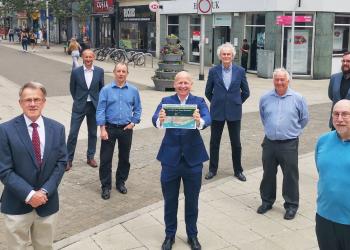