An updated and improved play area has opened to the local community that helped shape its new design.

Among many new features, the play area in Purdis Farm now includes seating and sculpture based on clay models handcrafted by local youngsters.

Funded through East Suffolk Council’s Outdoor Playing Space Fund, the redevelopment of the Murrills Park play area has been a community effort from as early as its inception.

In the summer of 2020, East Suffolk Council consulted residents of Purdis Farm for their views on how to spend available funds for 'sports and active play' from the Outdoor Playing Space Fund for Parishes.

The responses helped to create a tender – awarded to successful bidder, Groundwork East, ahead of a series of community events earlier this year to give residents an opportunity to see the new designs and offer feedback.

Youngsters cast clay models which provided inspiration for the hare and bunny seating and the moon-gazing hare sculpture that now serve as way markers around the park – indicating an existing walking route and information boards about the area.

Meanwhile, local residents invited to plant hedgerows during the spring will be welcomed back in the autumn for wildflower planting.

Some new baby swings are still to follow, as well as the installation of bike racks for visiting cyclists.

“This is a real demonstration of how we as a local authority can help deliver results for our residents by working with communities to identify and meet a local need.

“This was made possible by asking families and young people what they wanted from their local play area and encouraging their continued input into the development process.

“It’s marvellous that the clay models of local children have been made larger than life and installed as part of a community asset which they had a hand in creating.”

“We are delighted to have worked with East Suffolk Council on this project and how much the community has engaged with us.

“It is a wonderful, creative end result, which is more than just play, as improved biodiversity is at the heart of the design. A great result with excellent partnership working.”

At grand opening of the new-look play area, organised by Groundwork East and East Suffolk Council, children received goody bags and were given the opportunity to create birdhouses and insect hotels.

The event followed a similar celebration for the reopening of a play area in Martlesham in July. 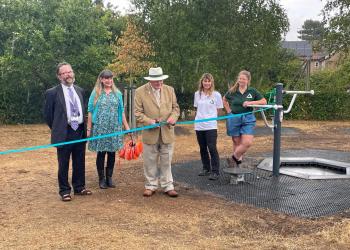