Felixstowe's Seafront Gardens has once again been officially recognised as one of the country’s best parks after receiving a Green Flag Award.

The serene Victorian cliffside site was today awarded the international quality mark for parks and green spaces for the seventh successive year.

This uninterrupted string of awards followed East Suffolk Council’s four-year restoration project, launched in 2011, to return the Grade II listed greenspace to its former glory as part of a town-wide regeneration programme.

The Green Flag Award scheme, managed by environmental charity Keep Britain Tidy, under licence from the Department for Levelling Up, Housing and Communities, recognises and rewards well-managed parks and green spaces, setting the benchmark standard for the management of green spaces across the United Kingdom and around the world.

Judges reported being very impressed by the well managed and maintained Seafront Gardens, which they called a “credit to the town” and deserving of the Green Flag Award. They also praised the site’s links to numerous community groups and the strength of the Friends of Felixstowe Seafront Gardens.

“It is a real feat for the Seafront Gardens to be able to fly the Green Flag for the seventh year running.

“The importance to the local community of this unique spot cannot be overstated – and I’m sure it has been of particular value over the last two years, when our parks and green spaces played such a vital role as places to meet safely.

“The Green Flag Award is testament to the hard work and dedication of the management and maintenance teams, and the continued involvement of a passionate friends’ group.”

“We are delighted to be raising the green flag for the seventh time! Achieving the Green Flag Award demonstrates that Felixstowe Spa Gardens are being managed to the high national standard of excellence.

“A huge thank you must go to the dedication and commitment of staff and volunteers who work tirelessly all year round, keeping the gardens in top shape for both visitors and residents to enjoy.

“The award also recognises that maintaining gardens, that are well-used and valued by its community, is about more than just cutting the grass. Access to good quality green space is vital if we are to tackle some of the challenges that we face, including the growing problem of obesity, the rise in mental health issues and the feelings of being disconnected from the communities in which we live.

“Felixstowe is incredibly lucky to have such a fantastic outdoor space set against the stunning backdrop of the coast – perfect for a gentle stroll, daily dog walk, family cricket or time out to relax and unwind or simply sit still and enjoy the view.”

“I would like to congratulate everyone involved in making Felixstowe's Seafront Gardens worthy of a Green Flag Award.

“This award is testament to all the hard work of staff and volunteers, who do so much to ensure that it maintains the high standards demanded by the Green Flag Award.” 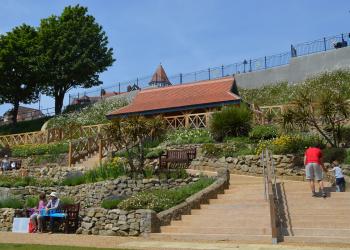