More than £350,000 awarded for Heritage Action Zone projects this year

More than £350,000 of funding has this year been awarded towards a series of renovation projects in the North Lowestoft Heritage Action Zone (HAZ).

Work is currently underway on 11 properties within the North Lowestoft HAZ, which includes the High Street and contains the town’s original main medieval settlement.

The projects are part of the five-year scheme, jointly funded by Historic England and East Suffolk Council, and running in partnership with Lowestoft Town Council, Lowestoft Vision and the East Suffolk Building Preservation Trust from 2018 to 2023.

The funding, from Historic England and East Suffolk Council, will further boost the High Street in the final months of the HAZ scheme – with some of the work already underway at some sites.

Significant funded work has begun at 136 and 137 High Street, where modern shopfronts have been removed and replaced with timber frame ones to bring the building in line with the style of adjoining 138 High Street.

Local joinery, MS Oakes has been carrying out work on the properties, which have been in the ownership of Kay Balls’ family for more than 60 years. Mrs Balls said:

"We very much enjoyed doing the historical research on the building and would like to thank the many people who helped us.

“We were able to get back to the 1860s – and the design reflects this and the adjoining shop. We are very pleased that MS Oakes has taken on the project, providing their expertise and knowledge, exceeding our expectations. We look forward to the finished shopfronts."

Funded work has also started at 108 High Street, formerly The Wheatsheaf, to repair windows, doors and facias, with completion scheduled for early August.

Work will also commence this week on the former Devereux Stores at 127-130 High Street, where funding has been provided to repair and replace the original sash windows, following planning approval, to the first and second floor, and to carry out stonework repairs.

Work funded through the HAZ is also underway at Grade II listed 147 High Street, the former Wesleyan Chapel, while upcoming projects include the former Maypole Dairy, at 73 High Street, where the timber frame Maypole Dairy shopfront will be reinstated, complete with ornate detailing and mirrored pilasters.

A planning application has recently been submitted for listed building consent for grant funded works to Grade II listed Arnold House to improve the roof and rainwater drainage system.

In addition, the re-build to the Grade II listed Crown Score Wall has been all but completed by Medieval Masonry and Alan Wright Consulting. As part of the works, East Suffolk Council’s partners at Suffolk Highways have cleared the drains and will be repairing the handrail.

“It is remarkable to see the scale and quality of restoration work already underway and planned for this part of Lowestoft.

“By fostering both the historic importance and development potential of these buildings, we can secure their economic and cultural worth to the community for generations to come.

“The HAZ programme is allowing us to revitalise our high streets through careful conservation and by putting deteriorating buildings back into use.”

“This is going to make such a difference to the High Street, bringing the unique historic character of these buildings back to life and making a very special destination for people to shop, visit, work and live.

“It’s great news that the Crown Score Wall has been repaired, which is such an important part of North Lowestoft’s story.”

Funding for the projects, as part of the North Lowestoft HAZ, came through two grant giving programmes, Partnership Schemes in Conservation Area (PSiCA) and Buildings At Risk, with applicants able to request up to 80% of project costs and required to meet eligibility criteria. 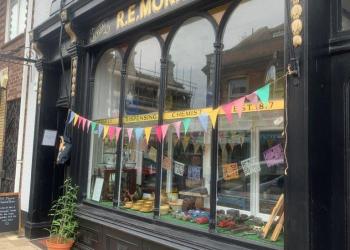