As part of the Lowestoft Heritage Action Zone, Historic England has commissioned a report to explore options for the revitalisation of Lowestoft's historic Grade II listed Town Hall.

A report exploring the options for the revitalisation of Lowestoft’s historic Town Hall, owned by Lowestoft Town Council, has recommended the creation of a Centre for Activities, Events, Creatives and Artisans within the historic building.

Hear about the next steps for Lowestoft Town Hall's development on Friday 13 March 3-5pm and 6-8pm at the Council Chamber, Hamilton House, Lowestoft. with speakers from Historic England, Lowestoft Town Council, East Suffolk Council and the Lowestoft Heritage Action Zone. There will be an opportunity to ask questions following the presentations.

The proposed restoration of the Grade II listed Town Hall aims to challenge the dilapidated image of the Old Town of North Lowestoft. It will provide vital facilities for local people and, as a creative hub, will attract a large number of visitors to the area generating footfall to stimulate investment in other local properties. It is suggested that the land behind the Town Hall could be used for car parking space to support access to the area.

The next stage of development is to seek funding from the Architectural Heritage Fund for detailed project development work. A partnership working group has been created by Lowestoft Town Council with East Suffolk Council and Historic England supporting and collaborating to progress the project.

Lowestoft Town Hall dates from 1857-1914 and is the most prominent architectural landmark in the historic old town of Lowestoft. It celebrates and represents Lowestoft at the height of its late 19th century prosperity and embodies the civic pride of the Victorian town.  The Town Hall is part of an important and extensive group of historic buildings in the High Street and a key landmark in the North Lowestoft Conservation Area. The site of the Town Hall has been a key one in the development of Lowestoft as civic business and religious activity has been carried out there in various buildings since at least the 16th century.

“Lowestoft Town Council is thrilled to pass this stage of our journey to redevelop the Town Hall, which is such an important part of the revitalisation of Lowestoft. The conclusions of this indepth study by Colliers International independently reinforces what many people of Lowestoft want and gives us a great guide as we move on to the next step.

The Town Hall is the civic centre of Lowestoft and holds a special place in many hearts.  It’s great to have this road map to a revitalised Town Hall and now it’s time to move forward."

“The Town Hall is an important part of the historic High Street and we are looking forward to working with partners to help give the building a new purpose which will benefit local people and visitors.”

“This is a really exciting project that will bring the old Town Hall back to life in a new role that will support the local community and Lowestoft’s historic High Street.”

“The restoration of the Town Hall is an essential part of the regeneration of our historic High Street. We are very fortunate to have some of the foremost experts in historic buildings from Historic England working with us. There is a lot of work to be done but the end result will worth the hard work.” 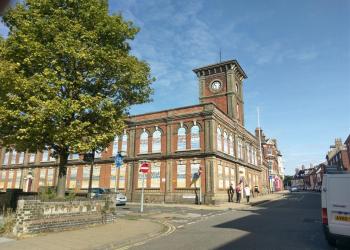