An East Suffolk business owner has been ordered to pay £5,160 in fines and court costs after he admitted failing to properly dispose of rubbish at premises near Halesworth.

Richard Boddy was due to face trial at Suffolk Magistrates’ Court on Monday 8 August over two counts of failing to comply with requirements imposed by East Suffolk Council, under section 47 of the Environmental Protection Act, between 7 June and 28 September 2021.

But the holiday accommodation owner chose to admit he breached requirements by failing to provide suitably sized receptacles for the volume of waste produced at Holly Tree Farm Barns, in Bell Green, Cratfield, and thereby allowing rubbish to collect around the bin compound.

Mr Boddy, of Bottesford, Scunthorpe, and now of Barbados, was issued a section 47 notice by East Suffolk Council in October 2020 following a number of complaints concerning overflowing bins and excessive waste – in some cases attracting wild animals – at the Cratfield holiday let site.

The notice directed that all waste products be placed in receptacles of a suitable size and type; that no waste be left on the ground around the bin compound or on the public highway, and that a trade contract for regular removal of waste be arranged.

During subsequent site visits, conducted in June and July 2021, a waste management officer discovered loose litter and black refuse bags full of rubbish on the ground around overflowing bins.

“We are always striving to support local businesses, and economic growth is one of our most important values as a local authority – but so is the environment. Local businesses therefore have a duty of care to ensure waste is properly dealt with.

“There was simply not enough capacity for the waste being produced at these premises, and although this business had a trade waste agreement in place with East Suffolk Norse, it only covered the removal and disposal of waste from April to September.

“The Council advised Mr Boddy about the need to increase the capacity for storing rubbish and to extend the existing trade waste agreement but was not prepared to accept his requests for an ad hoc service and empty the bins on request during the winter months.

“This shameful behaviour is just not acceptable to East Suffolk, the local community and our residents, and I hope this prosecution serves as a reminder of people’s responsibilities and that East Suffolk Council takes these matters very seriously.”

The court heard that a contract has since been put in place to provide suitable receptacles for the site.

Magistrates acknowledged that Mr Boddy had taken some steps to resolve the issue, and that correspondence between parties had, at times, been strained.

They said the offences had been aggravated by the duration and number of complaints and could have been avoided by Mr Boddy taking proper advice at an earlier stage. 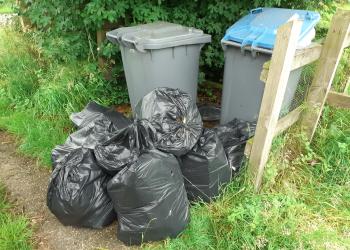