Construction is officially underway on a new community centre for Framlingham residents, supported by £700,000 in developer contributions.

Built in 1898, St Michael’s Rooms are no longer fit for purpose and a new community space is needed which can be used by local residents and groups.

To mark the beginning of construction for the Castle Community Rooms, a ‘sod turning’ event was held on the site on Tuesday 11 January, attended by representatives from Framlingham Parochial Church Council, Framlingham Town Council and East Suffolk Council.

To support this project, East Suffolk Council has allocated £700,000 in funding from Community Infrastructure Levy (CIL), a fee which the Council can charge developers when new housing is built in the district. CIL can then be put towards improvements to local infrastructure, such as play areas, schools and GP surgeries. The Council holds a list of key projects which are included in the Local Plan and these projects are then put forward for the latest round of CIL funding.

Cllr Maurice Cook, East Suffolk’s cabinet member for Resources and ward councillor for Framlingham said: “I am delighted that this project is now underway and is ideally situated so close to the heart of the town. Community Infrastructure Levy funding is used to provide infrastructure and support improvements to community facilities which enhance the lives of local residents. This new centre will provide the Framlingham community with a much-needed new facility where residents and groups can come together, meet new people and connect with others, which is vital for their health and wellbeing.”

Revd Chris Davey, Rector of St Michael’s Church said: “We are delighted that after so much hard work by so many people the building process is underway. Money from CIL funds, grants, and personal donations are all coming together to create a modern beautiful building for the Framlingham community.”

Planning permission for the Castle Community Rooms was granted by East Suffolk Council in February 2021.

For the latest on the project, go to www.stmichaelsframlingham.org.uk 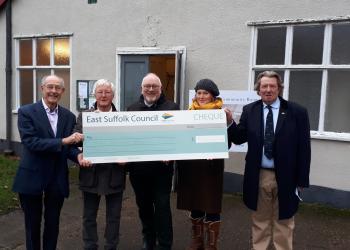