Home > East Suffolk parks amongst the best in Britain

East Suffolk parks amongst the best in Britain

More parks and green spaces than ever will be flying the Green Flag this year, including two parks located in east Suffolk.

Nicholas Everitt Park in Oulton Broad and Felixstowe Seafront Gardens are both winners of a prestigious Green Flag Award - along with a record-breaking 1,686 parks and green spaces across the UK.

The award, now celebrating its 20th year, recognises and rewards the best parks and green spaces across the country. A Green Flag flying overhead is a sign to the public that the space boasts the highest possible standards, is beautifully maintained and has excellent facilities.

Felixstowe Seafront Gardens has also been given Green Heritage site accreditation for its interpretation of the historic features and standards of conservation.

The seafront gardens have recently been transformed thanks to a £4.8million project, paid for by the Heritage Lottery Fund and Suffolk Coastal District Council, to restore the site to its former glory and provide a fantastic regenerated and revitalised attraction for tourists and residents alike.

The judges commented that the gardens, infrastructure and signage were all to a very high standard and particular praise was given to the partnership working.

“The restored gardens are the jewel in the crown of a vibrant Felixstowe seafront and we are absolutely delighted that it has been recognised. Particular congratulations should go to the Friends of the Felixstowe Seafront Gardens and Suffolk Coastal Norse for all their continued hard work.

We are absolutely delighted to receive a Green Flag Award which recognises and highlights that people in Felixstowe are benefitting from a green space of the very highest quality".

In Waveney, Nicholas Everitt Park is a traditional public park which is popular with visitors to the area and the surrounding community. Used throughout the year for a range of events, it is particularly well-known for activities associated with the Broad itself, including powerboat racing, sailing and fishing.

Park facilities include tennis courts, a bowling green, traditional bandstand, children’s play area, boating lake, trampolines and park café. In addition, the Lowestoft Museum is also within the park grounds, housed within a Grade II listed building. Beyond the museum is an area of mature trees, grass and reeds, with a number of small ponds providing a natural habitat for wildlife.

“We are absolutely delighted to once again receive a Green Flag Award from Keep Britain Tidy. This is the sixth consecutive year in which Nicholas Everitt Park has received this award and highlights the hard work of Waveney Norse and the Friends group in maintaining this space.

Waveney boasts many beautiful parks and green spaces for visitors and the local community to enjoy and I would encourage people to get out and spend time in these wonderful areas during the summer months.”

The park is supported by the Friends of Nicholas Everitt Park (FONEP) who carry out activities on a weekly basis including planting, renovation and refurbishment ensuring the park remains a welcoming green space for visitors.

“We are delighted to be celebrating another record-breaking year for the Green Flag Award scheme, especially as we celebrate the 20th anniversary of the Awards.

All the flags flying this year are a testament to the efforts of the thousands of men and women, both staff and volunteers, who work tirelessly to maintain the high standards demanded by the Green Flag Award.” 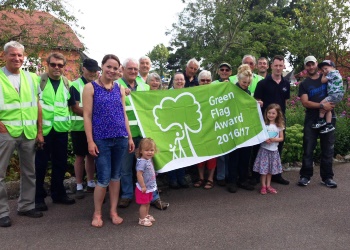