Martello Park in Felixstowe has been shortlisted in the 2016 Placemaking Awards for Regeneration.

Martello Park emerged from proposals to regenerate an area of derelict land along the south seafront of Felixstowe by means of a residential and leisure redevelopment.

Suffolk Coastal District Council’s  aim was to deliver new and affordable housing on the 17.5 acre site, while improving the physical and environmental urban fabric of the southern end of the town, making it a more attractive and accessible destination for visitors.

A Grade II Scheduled Ancient Monument, Martello Tower ‘P’ built in 1808, is at the centre of the site and is occupied, in part, by the local branch of the National Coastwatch Institution.

The design of the development has been heavily influenced by Felixstowe’s architectural heritage. The layout is based on a series of terraces which echo the pattern originally devised by landowner and local MP George Tomline in the late 19th Century,

Planning policy had reserved the site for resort uses, which was modified to permit the public realm scheme to fund the site in order to create a new destination within the resort.  Crucial to the scheme was the preservation of the major coastal landmark, Martello Tower ‘P’ along with coastal protection to minimise flood risk.

Planning permission was granted in 2012 for a development which included:

The scheme was shaped by feedback provided by the local community at public exhibitions of the plans.

The total cost of the development was £20 million and the financial contributions provided by Bloor have ensured the viability of the regeneration project at no net cost to the local authority.  Bloor has contributed £220,000 towards the refurbishment of Martello Tower and £75,000 towards other elements of the scheme.  The project was estimated as being worth approximately £3m to public benefit.

Martello Park officially opened in the summer of 2015 and has been a huge success.  The once derelict South Seafront is now a major tourist attraction and home to a thriving community of residents. Families are able to enjoy the beach, play equipment, and water play area, and the two kiosk cafes report excellent trading results with plans to expand business next year.

The benefits are also being felt further down the coast at Landguard Peninsula, which has seen a rise in visitors to its Georgian Fort, nature reserve and other attractions.

Martello Tower P continues to be the home for the local branch of the National Coastwatch Institution, providing a valuable service to the local community.  There are plans to open the Tower as a visitor centre in the future along with a third kiosk as the development continues to thrive.

Martello Park was highly commended in the Regeneration category, with overall winners Park Hill in Sheffield. 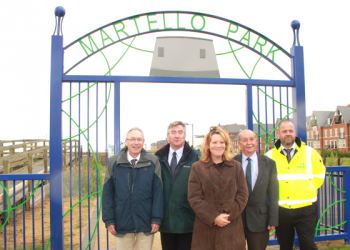