Mascots from local businesses, organisations and sporting groups are invited to take part in an exclusive race in support of the Women’s Tour 2016.

On Wednesday 15 June, Stage One of the Aviva Women's Tour will get underway in Southwold. The high-profile event will see world-class cyclists depart from Southwold Pier before racing a 132km route through Waveney towns and villages. Once the elite cyclists have left Southwold, athletes of a different kind will line up along the Women’s Tour official start line for a special mascot race.

Mascots from any Waveney businesses, community groups, sports clubs and other organisations are invited to take part in the 100m running race, which begins at approximately 10.15am. Competing mascots will use the same start line and beginning of the route as the professional cyclists.

The winning mascot will receive a signed Yellow Jersey, bragging rights and the opportunity to have photos taken on the official Women’s Tour podium.

“We are honoured and excited for Stage One of the Aviva Women’s Tour to be coming to Waveney and there is already a great deal of support being shown by local schools, businesses, and now even the mascots are getting involved. This fun race will provide some extra entertainment for spectators once the Women’s Tour has left the town and is an opportunity for local businesses and organisations to show their support.”

Mascots interested in participating in the race should contact Sarah Shinnie, Active Communities Officer on 01394 444652 or sarah.shinnie@eastsuffolk.gov.uk. 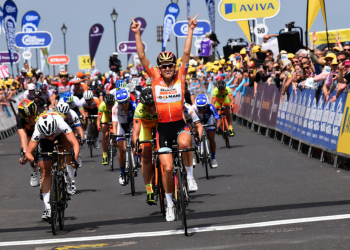