Home > Staying safe at the beach

Staying safe at the beach

Visitors to Waveney's award-winning beaches are being reminded about the importance of beach safety and the potential dangers of climbing on rock structures.

Ahead of the summer season, Waveney District Council, Sentinel Leisure Trust, the RNLI and the Lowestoft Volunteer Lifeguard Corps are urging people to stay safe when visiting the beach and in particular, reminding people of the dangers of climbing on the new rock structures.

"As part of the South Beach coastal protection project, 20,000 tonnes of rock was positioned on the beach to form two major rock structures. Warning signs are present on these structures and whilst we cannot prevent people from climbing on the rocks, we can remind everyone of the importance of beach safety. Over 400 people drown in the UK each year, with approximately 60 of these being children and young people. We want people to enjoy our award-winning beaches whilst being mindful of the risks."

"However the lifeguards cannot be present all the time and we would encourage people to put safety first when visiting the beach. We would ask that people refrain from climbing on the rocks and instead use the lifeguard-patrolled area, which is the safest place to swim and will be marked by red and yellow flags."

The Lowestoft Volunteer Lifeguard Corps will also be patrolling sections of the South Beach whenever possible.

Visitors are also reminded to make sure all litter and glass is disposed of in the litter bins provided.

Find out more at www.rnli.org 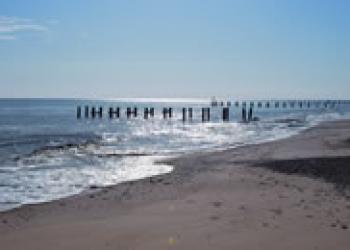