Schools and groups from across Suffolk have made their own festive decorations as part of a campaign aimed at teaching children how they can have fun reducing their waste in the run up to Christmas.

Following on from the successful 1,000 Suffolk Stars project last year, the Suffolk Waste Partnership invited schools and groups across the county to make 1,000 Brilliant Baubles. As part of the campaign to promote reuse and recycling, children and young people were asked to use recycled materials to decorate old CDs, to be displayed at two major Suffolk venues – The Apex in Bury St Edmunds until mid-January and Ipswich Town Hall until 9 January.

Twenty-four schools, two guide and brownie groups and one library have taken part in the project, with around 1,200 baubles being created and hung up just in time for Christmas.

The fantastically festive decorations, which have captured the imagination of children, have acted as a reminder that making decorations and presents from reused and recycled materials is especially important at Christmas when more waste than normal is produced.

Old CDs you no longer need can be sold on or sent for re-use at charity shops. They can also be placed in media banks at Suffolk Recycling Centres. If they are still in their cases they’ll be sorted for reuse, if not they’ll be recycled.

All schools that took part were also entered into a prize draw to win a £50 gardening voucher. There were so many deserving entries but the winning school, Tudor Primary school in Sudbury, will be presented with their prize on Friday 9 December at 12pm.

“Children at Tudor were very excited to take part in this innovative recycling project. The children were given the activity as a half term family challenge and we had over 100 CDs brought in to school. We were delighted at the creativity and enthusiasm from so many of our families. A great way to recycle and celebrate Christmas at the same time!”

“The 1,000 Brilliant Baubles campaign has been a fantastic way to celebrate how good we are at recycling and reusing in Suffolk!

“It’s great to see the pupils, parents and staff all working together. It’s the same as recycling in general, if we all do a little bit it adds up to making a very big difference.  Thank you to everyone who took part.”

“The baubles look wonderful and thank you to everyone who has taken part. We generate more waste than normal at Christmas time and this is a real example of how we can re-use items we no longer need.  These recycled materials used to decorate old CDs really have produced a stunning display.” 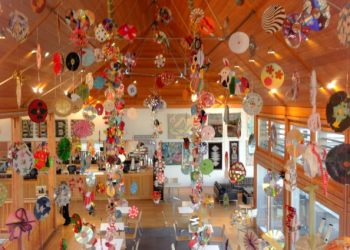