Home > Delivering a budget that works

Delivering a budget that works

Despite ongoing reductions in the funding received by councils from central government, Council Leader Colin Law is delighted that Waveney will deliver a balanced budget for the forthcoming financial year.

Presenting the council’s budget for 2017-18, Cllr Law confirmed that Waveney will create over £3 million in efficiency savings and will generate over £1 million in additional income.  And yet, the hard work undertaken to reduce costs, while also protecting important services for local communities, means that the portion of a typical Council Tax bill paid to Waveney will only increase by less than £5 per year, per household.

This is all in the context of a four-year settlement which means that, by 2019/20, the Council will receive around £2.6 million less from central government than it did in 2015/16 and Cllr Law admitted that he was very pleased that the Council were able to keep this council tax increase so low.

“As in previous years, this budget has been set in very challenging circumstances, and once again, a huge amount of hard work has gone in to balancing the books for the next 12 months. We have taken some major decisions that both influence next year’s budget and the financial position in years to come, and we are making significant progress towards a more sustainable financial position.

“This Budget includes significant savings and increases in income, by securing efficiencies, reviewing partnerships, considering asset management opportunities and delivering major projects. Additionally, we will continue to invest in the District - pumping just under £49m of capital investment in to Waveney in the next four years.

“And yet, the increase in the portion of Council Tax paid to Waveney of £4.95 works out at a very modest increase of less than 10p per week for each household, despite a national economic background characterised by uncertainty; affecting the costs we incur and the funding we receive.

“Additionally, it is worth remembering that despite the huge range of vital services we deliver to local communities, we receive only around 11p in every pound of council tax paid, with the vast majority going to the County Council and Police.”

Cllr Law also believes that the historic and innovative decision to merge with Suffolk Coastal will also play a vital role in ensuring that essential services are protected for those who need them most. He says that this is one of a number of major decisions taken in the past 12 months, that Waveney can be very proud of.

“Working in partnership has already helped the councils save over £16m since 2010. Now, by creating a new, larger and more influential council, we will be able to keep costs down, enabling us to maintain and improve the services that local people depend on.

“In addition, the decision to create new parish councils for Lowestoft and Oulton Broad recognises the importance of communities in decision making and resolves a decades-old discrepancy, with representation at this level for these locations.

“We are also very pleased with the key role Waveney District Council is playing in the development of hugely important infrastructure projects such as the new road crossing here in Lowestoft. This is multi-million pound scheme which this administration has worked tirelessly to see come to fruition and which will have huge economic benefits for the district.

“We have also invested in temporary flood protection barriers which provided enormous reassurance during the surge warnings earlier in the year. This is ahead of the permanent flood protection scheme for the town which, once again, we have played a key role in securing. 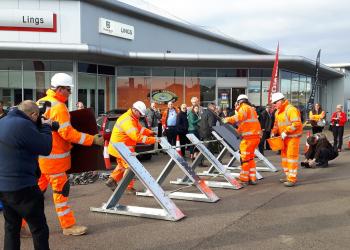