Lowestoft’s position as one of the UK’s key areas for off-shore renewable energy has been noted as Suffolk County Council today unveils the proposed design for the town’s £90million Lake Lothing Third Crossing.

The bridge has been in development ever since conditional funding was granted by the Department for Transport in March 2016 with the crossing design not only focusing on its functionality, but also its look and potential to become a new emblem for the town.

The crossing draws inspiration from the town’s imposing wind turbine, ‘Gulliver’ and the design ensures the crossing fits into the existing road network and waterways ensuring the port and railway operations will be able to continue.

The bridge will be required to open to maintain the Port of Lowestoft’s operations, the proposed crossing will be 12 metres above the high tide levels, significantly higher than the A47 Bascule Bridge, enabling a larger number of vessels to pass under the new crossing without a need for it to open.

To open the bridge, hydraulic pistons lift the bridge deck, which rolls back on the vertical part of the structure, that contains a counterweight, holding the bridge at a specific angle to allow vessels to pass through safely. A control tower would operate the bridge – although no decision has been made on its location yet.

The structure is being designed with all users in mind as well – specific gradients are being used to restrict the height of the bridge.

The public will be invited to have their say on the new bridge designs as part of the consultation, which is due to begin on Monday 4 September.

“The design of the bridge reflects the forward-thinking attitude of the town and ensures the crossing will be an iconic place in the town alongside its primary role as a route for all road users.

“Inspiration has come from the area surrounding the town and industries emerging from Lowestoft.

“I’m really impressed with the designs and I believe this has the potential to become an iconic structure not only in Suffolk, but across the country.”

“The design stage is yet another important milestone of progress towards the Third Crossing over Lake Lothing becoming a reality.

“What is suggested here gives Lowestoft an iconic symbol of future growth based on renewable energy. This illustrates the positive future Lowestoft will have in the next few years.

“I encourage people to fully take part in the consultation as this is their bridge and their views about it are very important.”

“This exciting design, reflecting Lowestoft's growing status as a key location for renewable energy, will be a real talking point for the town. We would encourage people to comment on the proposed design once the consultation begins next month.” 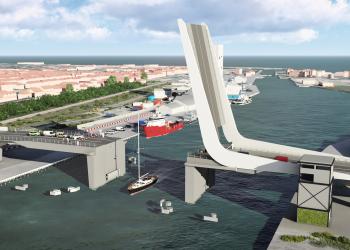